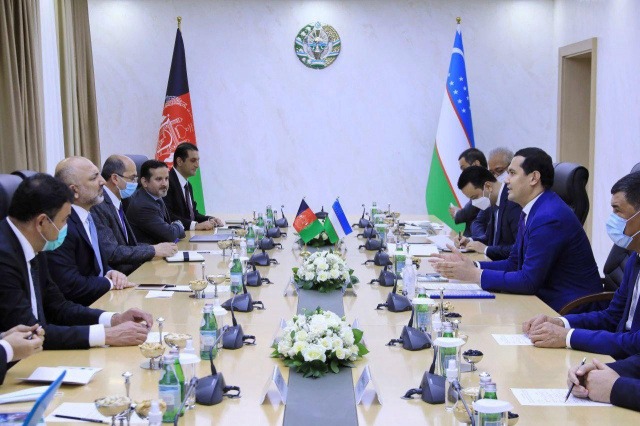 Deputy Prime Minister, Minister of Investments and Foreign Trade of Uzbekistan, Sardor Umurzakov, has met with the Acting Minister of Foreign Affairs of Afghanistan, Haneef Atmar.

The parties discussed current issues of trade, economic, investment, transport and logistics cooperation between the two countries, as well as prospects for the implementation of joint projects in energy, construction of railways, trade and infrastructure development in Afghanistan.

The issues of accelerating the construction of Surkhan – Puli-Khumri power transmission line and elaboration of the corresponding draft agreement, as well as conducting expert negotiations on the preparation for the signing of the draft Agreement on international road traffic were considered.

Special attention was paid to the issues of strengthening cooperation in development of transport corridors through the implementation of joint projects in railway transport.

An agreement was reached on the adoption of additional measures to create conditions for increasing the trade turnover, including on development of infrastructure for expanding border trade and organizing the supply of agricultural and industrial products that are in demand in the markets of the two countries.

Following the meeting, JSC National Electric Networks of Uzbekistan and Da Afghanistan Breshna Sherkat (DABS) signed an agreement on the supply of electricity for a period of 10 years.