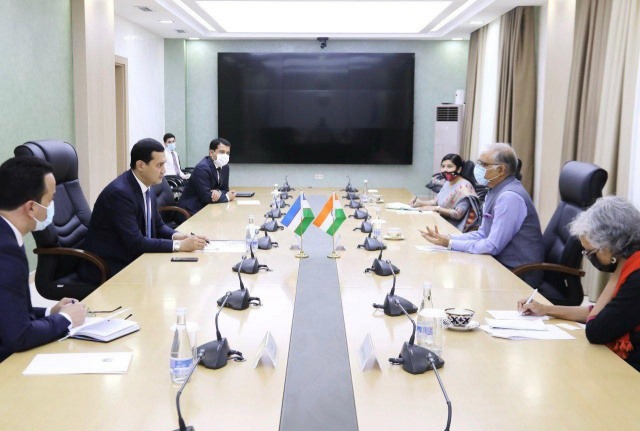 The parties discussed current issues of investment, trade-economic, financial-technical and cultural-humanitarian cooperation between the two countries.

The parties agreed to continue the joint development of new investment and export agreements in information technology, pharmaceuticals, textile manufacturing, agriculture, production of building materials, as well as to hold the first meeting of Uzbekistan – India Committee for coordination and promotion of practical implementation of bilateral projects in the near future, which promises to become an important step in sustainable development of bilateral relations.

The possibility of expanding the volume of financial-technical cooperation between the two countries by increasing the credit line of the Export-Import Bank of India to finance socially significant projects in Uzbekistan was considered.

Following the negotiations, Santosh Jha, on behalf of the Government of Uzbekistan, was expressed appreciation for the invaluable contribution to development of Uzbekistan – India relations, as well as wishes for successful work in the new post of Ambassador Extraordinary and Plenipotentiary of the Republic of India to the Kingdom of Belgium along with accreditation as the Ambassador to the EU.