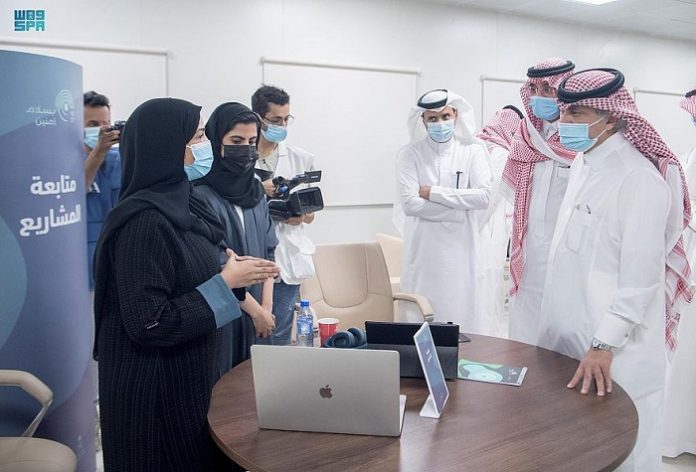 These centers, which are prepared with technical equipment and media cadres specialized in various print and audiovisual media, will highlight the efforts of Saudi Arabia and the services it provides to the pilgrims so that they can enjoy a safe and stable pilgrimage.

Al-Qasabi started his inspection tour by visiting the Media Operations Room for the Hajj Season 1442 AH and the Press Conference Headquarters, where he listened to a full explanation of the services provided by the room, such as news and reports, and conducting press and television interviews that support the needs of representatives of the various media, in addition to providing digital communication techniques that help them to accomplish the tasks of their various coverage of Hajj activities.

The minister was briefed on the Hajj Virtual Press Office that works to provide local and international media outlets with various media materials around the clock. He also met with the team of the unified media program to support government agencies, before visiting the Headquarters of the Audiovisual Media Authority and taking a look at its preparations and equipment.

After that, Al-Qasabi visited the Media Center of the Ministry of Hajj and Umrah, and listened to an explanation of the center’s work and its media contributions. Then he reviewed the technical equipment of the Radio and Television Authority in the Namira Mosque in Arafat, and inspected the headquarters of the Ministry of Media in Mina, and reviewed the equipment available for the system, and the Jamarat Bridge Studio of the Radio and Television Authority.

Further, the minister visited the Media Center of the Saudi Press Agency (SPA) at Umm Al-Qura University, which is the fruit of a partnership between the two sides to support the activities of covering the Hajj season. He was briefed on the functioning of the center, which is equipped with the latest media technologies and computer networks, as it produces media materials, and prepares news, reports and field stories in various Hajj-related aspects.

At the end of his inspecting tour, Al-Qasabi directed the center’s work team to make maximum efforts to highlight the Kingdom’s role in serving the pilgrims, and to reflect the honorable image of the various sectors participating in the Hajj activities, in order to advance to achieve the directives of the wise leadership, and to highlight the rite of Hajj and the tolerance of Islam and the equality among all Muslims.