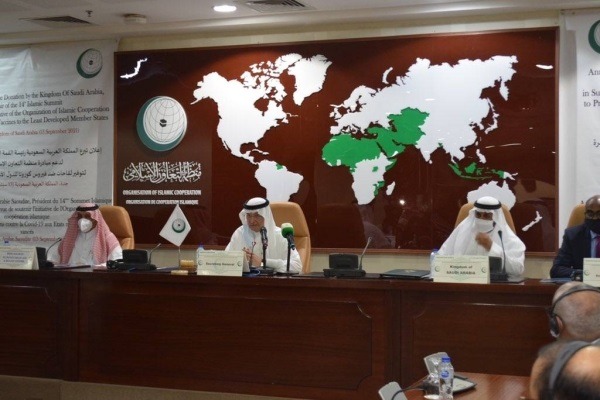 Jeddah (UNA-OIC) – Saudi Arabia, Chair of the 14th Islamic Summit and the host country of the Organization of Islamic Cooperation (OIC), donated SAR20 million to support OIC’s initiative to provide COVID-19 vaccines for health workers and the elderly in the OIC least-developed countries (OIC-LDCs).

This generous donation, which was made in coordination with King Salman Humanitarian Aid and Relief Centre (KSrelief), will benefit 22 OIC-LDCs including Palestine, the OIC General Secretariat announced here a press conference on Monday.

Al-Othaimeen stressed that this initiative is part of the OIC’s continuous efforts to enhance Islamic solidarity, support causes of the Islamic world and develop the Islamic joint action in all fields among member states and with the rest of the world.

The General Secretariat appreciates this Saudi generous support, which is considered the first response to the OIC’s call to provide vaccines for the least developed countries, he said.

Al-Othaimeen also expressed thanks and gratitude to Custodian of the Two Holy Mosques King Salman, Head of the Islamic Summit, and Crown Prince Mohammed bin Salman, for their quick response to support the OIC’s initiative.