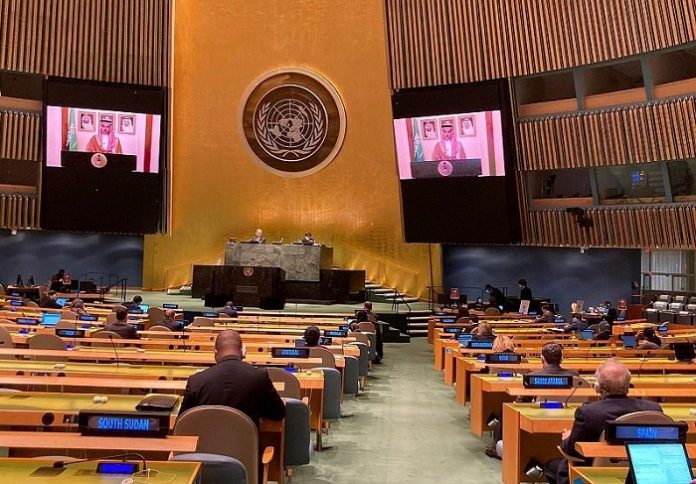 New York (UNA-OIC) – Saudi Arabia’s Foreign Minister Prince Faisal bin Farhan bin Abdullah on Monday confirmed that the Kingdom was and still is a mediator of peace to end many international conflicts, side by side with the United Nations and its various bodies, for the sake of all that is good for humanity.

This came in the Kingdom’s speech during the virtual high-level meeting to celebrate the 75th anniversary of the founding of the United Nations, where the foreign minister said Saudi Arabia, under the leadership of Custodian of the Two Holy Mosques King Salman, continues today its tangible efforts to pursue its path to achieve stability, prosperity, growth and peace in the region and the world.

“Global cooperation and concerted international efforts to achieve security and prosperity have an effective and positive impact on the lives of peoples,” he said, pointing out that Saudi Arabia has sought to achieve this through constructive participation in UN initiatives, starting with participation in setting sustainable development goals and coordination in joint counter-terrorism efforts, and the Kingdom’s cooperation with the UN in combating COVID-19 that has swept the world, as well as in addressing the health, social and economic impacts of the pandemic.

Prince Faisal bin Farhan renewed the Kingdom’s keenness to move forward with the basic, lofty and noble goals on which the United Nations was founded.