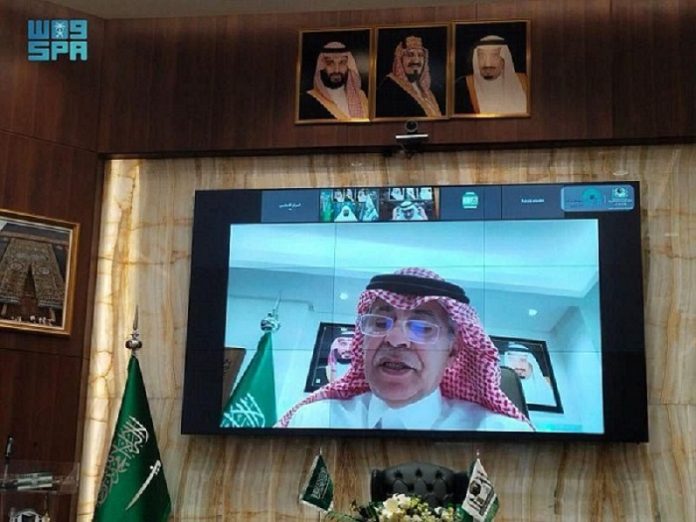 Dr. Al-Qasabi, in his speech on the occasion, expressed happiness to participate in the launch of the Presidency’s media plan for this year’s Hajj season, while stressing that it is the privilege and honor of Saudi Arabia’s leadership and people to serve the Two Holy Mosques and the pilgrims.

He said the Saudi government, under the leadership of Custodian of the Two Holy Mosques King Salman and Crown Prince Mohammed bin Salman, has enabled all relevant Hajj sectors to harness all the security, safety and health capabilities to facilitate the services that allow pilgrims to perform the Hajj rituals in ease and tranquility.

The acting media minister stated that for the second consecutive year, organizing the Hajj season is taking place amid exceptional circumstances in light of the ongoing developments of the COVID-19 pandemic and the emergence of new virus variants. Accordingly, Saudi Arabia has decided to limit this year’s Hajj season to 60,000 pilgrims, selected from both citizens and residents inside the Kingdom.

“This move was taken in order to preserve the health and safety of pilgrims, and ensure that the Hajj rituals are held in a safe and healthy environment with the application of precautionary measures,” he added.

For his part, Sheikh Al-Sudais extended his thanks to the wise leadership for the generous and great care it accords to the Two Holy Mosques and the pilgrims, Umrah performers and visitors. He stressed that the Kingdom’s care was manifested in the prudent and successful decisions and precautionary measures being implemented in the Two Holy Mosques since the pandemic outbreak.

Al-Sudais also maintained the Presidency’s keenness to intensify precautions and activate the technical aspects, while facilitating the performance of the rituals, enriching the experience and achieving leadership in good hospitality, in line with the values of Saudi Arabia and its Vision 2030.

The Presidency’s plan for the current Hajj season depends on several pillars, namely hospitality that aims to highlight the values of generosity and cordiality in providing services to pilgrims, he said, pointing out that these values are derived from the true religion and teachings of Prophet Muhammad (PBUH).

The General Presidency has designated nearly 10,000 qualified and trained people to serve pilgrims while observing the precautionary and preventive measures for this Hajj season, Sheikh Al-Sudais.

He added that the Presidency also plans to keep pace with qualitative leaps in technology, stressing keenness to launch many electronic services to facilitate the performance of the pilgrims’ Hajj rituals.