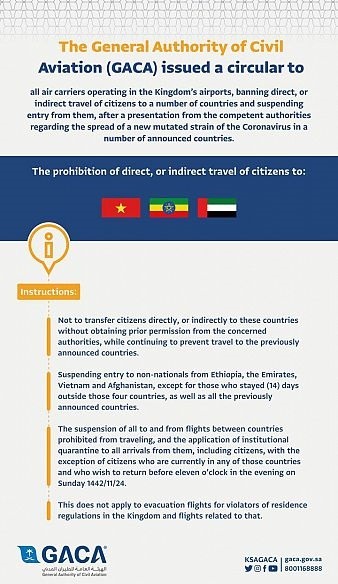 Riyadh (UNA-OIC) – Saudi Arabia’s General Authority of Civil Aviation (GACA) has issued a circular to airliners operating in all of the Kingdom’s airports about the prevention of direct, or indirect travel of citizens to a number of countries and the suspension of entry from them.

The decision proceeds from the Saudi government’s keenness on the safety of citizens wishing to travel abroad, and in light of the continuing outbreak of the coronavirus pandemic and the spread of new variants of the virus.

The circular provides that airliners must not transport citizens directly or indirectly to Ethiopia, the United Arab Emirates, before obtaining prior permission from the concerned authorities in the Kingdom. Meanwhile, the decision to ban travel to the previously announced countries remains in place.

GACA indicated that non-Saudi citizens from Ethiopia, the UAE, Vietnam, and Afghanistan are suspended from entering the Kingdom, except for those who have stayed 14 days outside those four countries, as well as all previously announced countries.

In its circular to the airliners operating in Saudi airports including private aviation, GACA stressed suspension of flights to and from the said countries and applying institutional quarantine to all arrivals, including citizens. The circular exempts citizens who are currently in any of those countries and will return before 11 pm on Sunday, July 4.