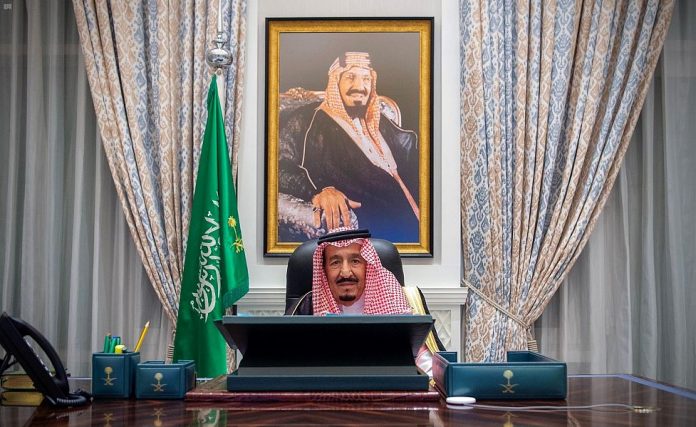 The Cabinet extended sincere congratulations to the Custodian of the Two Holy Mosques on the occasion of the sixth anniversary of his accession to the throne, citing the development and growth achieved during his prosperous era. The Cabinet also noted the continuation of the process of reforms and output in all fields, the work for a bright future, enhancing the Kingdom’s pioneering position in the international community, the pivotal role it is undertaking during its current presidency of the G20 and its partnership at the international level.

The Cabinet highly valued the contents of the annual speech delivered by the Custodian of the Two Holy Mosques at the inauguration of the first year of the 8th session of the Shura Council, citing the contents and prudent vision covering the Kingdom’s internal and external policies as well as its positions towards the current political, economic and humanitarian issues.

The royal speech also covered the Kingdom’s contribution to achieving regional and international security and peace, its efforts to help alleviate the impact of the COVID-19 pandemic as well as to provide all kinds of comfort for pilgrims and Umrah performers. The speech further set the ambitious goals of the country to reach enhancing its inclusive developmental march through economic diversity and proceed towards progress and prosperity according to the Kingdom’s Vision 2030 and decisively working to combat corruption.

The Cabinet lauded the speech of Crown Prince Mohammed bin Salman, deputy premier and minister of defense, in which he reviewed the unprecedented achievements the Kingdom reached in a short and speedy period at all levels. He also cited the qualitative leap that took place in new promising sectors and the progress reached as per the Kingdom’s Vision 2030. The speech highlighted the accelerating growth over the last three years, including doubling the size of the Public Investments Fund from SR560 billion to more than SR1.3 trillion as well as the vast restructuring of a number of sectors aiming to enhance the state’s non-oil revenues, the success to curb the impact of coronavirus, determination to combat terror, extremism and corruption and increasing the rates of employment.

In a statement to Saudi Press Agency (SPA), Acting Media Minister Dr. Majid bin Abdullah Al-Qasabi disclosed that the Cabinet expressed Saudi Arabia’s aspiration to hold G20 Riyadh Summit next Saturday and Sunday to review and discuss policies and initiatives that would address the implications of the pandemic in order to restore hope and reassurance to the peoples with the aim of protecting lives and restoring global growth and jobs through solutions provided by the Kingdom’s presidency in the short term to overcome the COVID-19 pandemic in addition to focusing on a stronger, more comprehensive, sustainable and solid recovery via focusing on the issues submitted by the Kingdom’s presidency in the financial, monetary, economic and social fields. These joint policies and initiatives will contribute to achieving the objective of the presidency to realize opportunities of the 21st Century for all through empowering individuals, protecting the planet and harnessing new horizons towards achieving the aspirations of the peoples around the world.

The Cabinet highlighted the statement issued by the Extraordinary Meeting of the G20 Finance Ministers and Central Bank Governors under the presidency of the Kingdom of Saudi Arabia regarding the agreement on a common framework aimed to facilitate timely and orderly debt treatment for Debt Service Suspension Initiative (DSSI), with broad creditors’ participation including the private sector in light of a continuation of the COVID-19 pandemic implications.

The Cabinet affirmed that the regulatory, structural and financial reforms in the electricity sector, which were approved by the Royal Order, will contribute to achieving the sustainability of raising the efficiency of the electricity sector in the Kingdom, adding that these reforms will positively reflect on the sector’s performance in order to enable the increase in generation efficiency of plants, reduce the use of liquid fuels, raise the level of environmental commitment, and enable the production of electricity from renewable energy sources with the aim of achieving the goals of the optimal energy mix for the production of electricity, improving and transforming the distribution networks into smart and digital networks in order to enhance the reliability of the provided service.

The Cabinet reviewed the latest developments of the coronavirus pandemic at the local and international levels as well as the latest COVID19 statistics with regard to a decline in the levels of infection and spread as well as the critical cases with recording more recoveries bypassing the confirmed cases.