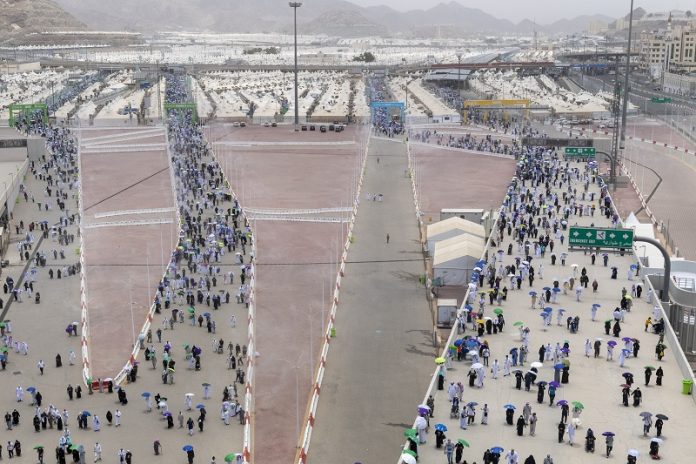 Makkah (UNA-OIC) – Hajj pilgrims on Friday completed their rituals with ease and tranquility, amid an integrated system of services and precautionary measures, concluding a successful Hajj season, with no infections of coronavirus or other epidemics.

The success story of the exceptional this year’s Hajj began with limiting the number of pilgrims to 60,000 citizens and residents in Saudi Arabia, who have been fully vaccinated against COVID-19, in a measure approved by the Saudi government to ensure the safety of pilgrims, and to prevent the virus spread that may result from the usual mass gatherings.

A scientific study, prepared by an international research team, concluded that limiting the number of Hajj pilgrims to 60,000 contributes to curbing the coronavirus and preventing its spread. The study emphasized that the total allowed capacity crowds and stepping up the precautionary measures to the highest level are closely related to reducing the spread of COVID-19 infection.

In addition to limiting the number of pilgrims, the Kingdom has developed many sophisticated applications and technologies that have enabled pilgrims to perform their rituals easily, and contributed to achieving social distancing requirements.

Saudi Arabia’s Ministry of Hajj and Umrah has also adopted the “electronic bracelet”, which contains details showing the identity of the pilgrim and all his/her official data. The electronic bracelet also allows following up on the pilgrim’s health status and intervention in any emergency cases, in addition to being used to send awareness messages to pilgrims.

This year’s Hajj season witnessed the use of robots to serve the pilgrims at the Grand Mosque. These robots are equipped with a screens, cameras and microphones, to answer pilgrims’ inquiries, and to follow up on adherence to precautionary and preventive measures in accordance with applicable health protocols, as they work to measure body temperature, and note the commitment to wearing masks through artificial intelligence techniques.

The Professor of Computer Engineering at the Custodian of the Two Holy Mosques Institute for Hajj and Umrah Research, Dr. Mazen Al-Shamrani, stressed that all operational matters in the Hajj season are based on the integrated digital system to coordinate services between agencies, control quality, schedule grouping of pilgrims and manage their trips according to the exceptional Hajj management system.

Speaking to the Union of OIC News Agencies (UNA), Al-Shamrani said, “The Kingdom has moved years ago from the usual pilgrimage to the smart pilgrimage, including the use of applications, smart maps, digital tracking systems, and the smart Hajj card.”

He pointed out that the security and safety requirements in light of the emergence of the coronavirus have led to the strengthening of the trend towards smart solutions so as to ensure that there are no cases of the virus outbreak.

The Hajj security forces imposed a security cordon at the entrances to Makkah and the holy sites, making the entry to the Grand Mosque and the holy places with official permits, in order to ensure the safety of pilgrims and adherence to precautionary measures.

The security authorities were keen to secure all safety requirements in the holy sites through security and safety patrols to maintain the security and comfort of pilgrims around the clock.

The Saudi Ministry of Health has operated hospitals in the Holy sites and Makkah with their full operational capacities to deal with emergency cases of pilgrims, and emergency teams, supported with more than 40 ambulances, have been deployed throughout the holy sites.

The Ministry of Hajj and Umrah prepared plans for grouping according to specific lanes and timetables to organize the movement of pilgrims between the holy sites and the Grand Mosque, to prevent overcrowding, using about 2,000 buses accompanied by 1,400 guides to supervise their routing through the lanes and ensure pilgrims’ compliance with the precautionary measures to combat coronavirus.

The Presidency of the Two Holy Mosques also worked on organized grouping schedules to receive pilgrims in the Makkah Grand Mosque, by applying physical distancing measures between the pilgrims and and placing indicative ground posters on the Grand Mosque courtyards and the Mataaf area, to control the pilgrims’ movement in a safe and healthy manner.

The presidency also completed preparation of the Mataaf floors as well as the ground and first floors, totaling 25 lanes in the Mataaf, four lanes on the ground floor, and five lanes on the first floor, in addition to allocating paths for people with special needs, in accordance with the precautionary measures. It further allocated specific entry gates and others for exit, to ensure smooth movement of crowds.

All these concerted measures resulted in the success of all Hajj health plans, and the end of the Hajj season without recording any cases of coronavirus or any other epidemic diseases, as announced by Saudi Health Minister Dr. Tawfiq Al-Rabiah.

He said the agencies involved in serving the pilgrims have made great efforts to implement the Hajj Health Plan to ensure the safety of pilgrims and prevent the spread of infection among them in light of the coronavirus pandemic.

“By the grace of Allah, these early efforts and precautionary measures contributed to dealing with the health situation of the pandemic during this year’s Hajj season, which necessitated limiting the performance of Hajj to 60,000 pilgrims who completed the vaccine, which had a tangible impact on preserving the health and safety of pilgrims,” the minister added.

Dr. Turki Habibullah, Professor of Environmental and Health Studies at the Custodian of the Two Holy Mosques Institute for Hajj and Umrah Research, said: “In addition to Saudi Arabia’s great experience in crowd management, there are several factors that contributed to this health success, including the imposition of physical distancing, and the use of safe transport buses, with each bus carrying only 20 pilgrims.”

Habibullah told the Union of OIC News Agencies that the social distancing was also precisely applied in the pilgrim camps. He added that each camp was allocated for only 50 pilgrims given the large capacity of these camps.

Given the fact that all the participants in the Hajj activities are fully vaccinated against COVID-19, has contributed to organizing a Hajj season free from coronavirus infections, he said, adding that the success of awareness-raising plans on the danger of the virus, extensive sterilization operations and the availability of masks, and tight grouping plans during all the Hajj stages, also contributed to preventing infections.

It is noteworthy that governments and international organizations commended the success of the Saudi government in managing this year’s Hajj season despite the exceptional circumstances that the world is going through as a result of the emergence of the coronavirus. The World Health Organization (WHO) also applauded the regulations taken by Saudi Arabia at the level of public health to ensure the safety of pilgrims amid the pandemic.