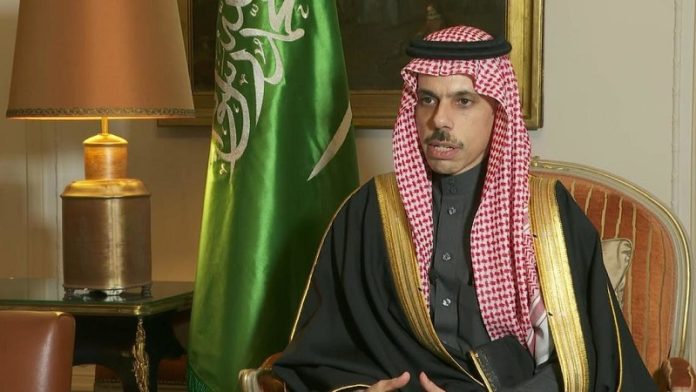 The minister also noted the efforts of the Kingdom of Saudi Arabia in supporting the OIC and helping it achieve its objectives and defend Islamic causes.

This came in a speech delivered by Deputy Foreign Minister Eng. Waleed bin Abdul Karim Al-Khuraiji on behalf of the foreign minister during ​the meeting of the Group of Strategic Vision (GSV) “Russia – Islamic World” held in Jeddah on Wednesday.

Prince Faisal bin Farhan hailed Russia’s role in the OIC and its efforts over 15 years since its accession as an observer member of the Organization, believing in the importance of joint action and the necessity of dialogue among followers of religions as one of the most important tools for achieving peace around the world.

He added that this meeting promotes dialogue between the Islamic world and Russia, and enumerates frameworks of cooperation and partnerships, which contribute to strengthening regional and international security, stressing that convening of this event in the Kingdom is a sign of the wise leadership’s interest and quest to deepen understanding and dialogue between different cultures, followers of religions and peoples.

The foreign minister underlined that Saudi Arabia seeks to spread a culture of coexistence and tolerance, and has made tangible efforts in this context, including the establishment of international dialogue. He stated that the Kingdom has sought to build an effective internal dialogue between all spectrums of society through the King Abdulaziz Center for National Dialogue (KACND), and has contributed internationally to spreading the culture of dialogue among followers of different religions and cultures, through several initiatives, most notably, the establishment of the King Abdullah bin Abdulaziz International Centre for Interreligious and Intercultural Dialogue (KAICIID), and the adoption of the Makkah Document, and support for the efforts of the Office of the United Nations Alliance of Civilizations (UNAOC).

Prince Faisal bin Farhan went to say that “The Kingdom was keen to follow up and develop all these efforts through setting up a national committee to follow up the initiative of the Custodian of the Two Holy Mosques for Dialogue Among Followers of Religions and Cultures, believing in its active role regionally and internationally in building bridges of communication and raising the banner of coexistence and peace in a world overflowing with conflicts.”

He indicated that the Saudi-Russian relations have witnessed, over 95 years, a steady development based on the foundations of mutual trust and understanding, as well as continuous coordination on issues and topics of concern to the two countries and the region. This has enhanced opportunities for cooperation in various political, economic, cultural fields, and contributed to achieving growth and prosperity for the two countries, and participated in maintaining international peace and security.

Concluding his speech, the Saudi foreign minister stressed that the Group of Strategic Vision is a step towards strengthening understanding and dialogue between Russia and the Islamic world, and contributes to achieving international peace and security through cooperation and consultation on various issues, in addition to promoting economic partnerships.