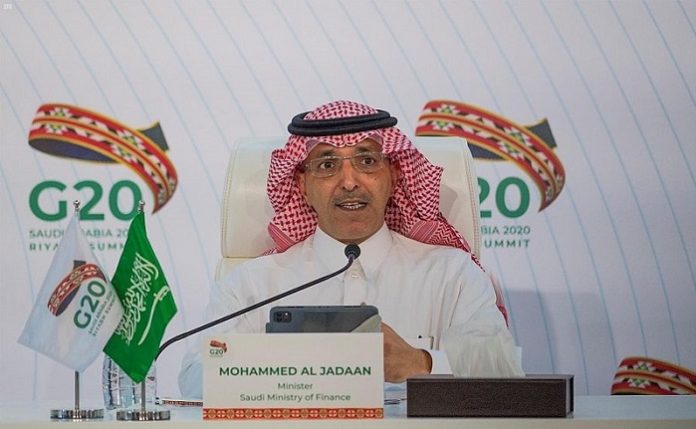 Riyadh (UNA-OIC) – Saudi Finance Minister Mohammed bin Abdullah Al-Jadaan confirmed that the G20 Summit final communiqué has gained the consensus of all leaders of the member states of the group, culminating Saudi Arabia’s presidency as well as the initiatives submitted at the summit with absolute success.

Al-Jadaan stated that the Kingdom’s presidency of the G20 has focused on realizing opportunities of the 21st century for all, praising the initiative on which the group agreed. He cited the importance of extending assistance to developing countries and providing support for poor states, considering it as among the most important outcomes of the summit, particularly as regards to six-month debt suspension and extending the measure to another six months.

This came in a press conference for the Kingdom’s presidency of the 15th G20 Leaders’ Summit, held by the Minister of Finance Mohammed bin Abdullah Al-Jadaan and the Saudi G20 Sherpa Dr. Fahad bin Abdullah Al-Mubarak in Riyadh today following the end of the summit meetings.

The Saudi minister drew attention to the most ambitious agenda submitted by the Kingdom early this year as well as the added agenda which coincided with the great damages accompanying the outbreak of coronavirus. He said the agenda also included initiatives in support of the world economies aiming to preserve the health of peoples and means of their living, not only for the peoples of the group’s members but for all peoples of the world.

Al-Jadaan stressed that the most important of these proposals, which the Kingdom adopted by virtue of its chairmanship of the G20 summit, concerns suspending the payment of debts agreed upon by the Group’s member states from which 33 countries benefited. He cited their allocation of $5 billion for this purpose, and this will positively affect the economies of the beneficiary countries from the suspension of these debts and improve their health care, increasing the opportunities for development that will have a positive impact on many peoples around the world, and perhaps the Republic of Angola is one of the countries benefiting from the suspension of debts, according to the World Bank.

He said that this is likely due to the G20 countries’ keenness to achieve the greatest benefit for all the peoples of the world, especially in light of the COVID-19 pandemic, which affected by its negative impacts on the economies of all countries of the world and many non-economic affairs.

The Saudi minister underscored that these meetings were fruitful and contributed to the emergence of initiatives agreed upon by all G20 leaders, making G20 the world leader in combating this pandemic and the search for the best ways to protect the planet and its population. He emphasized that the goal of the G20 is the inclusion of everyone for a better life, so the labor market and jobs were among the G20’s priorities and concerns, especially in low-income countries.

Al-Jadaan indicated that the capabilities were as challenging while the initiatives of pluralism became a goal for everyone for the recovery of all countries across the world.

The minister stated that the G20 ministers endorsed the importance of working with the World Trade Organization (WTO) to open borders in a way that gives reasonable and limited protections among the WTO Member States. He affirmed that empowering societies is crucial for the achievement of sustainable and equitable growth, which is the G20 leaders desired goal.

He also emphasized the importance of trade, digitization and artificial intelligence as components of growth, while not neglecting the negative aspects that may inflict the jobs and labor market in societies with limited skills.

The finance minister explained that the G20 has been keen, through its initiatives, to provide adequate vaccines for all and ensure access to all countries, as we support these efforts through the international organization’s Development Bank and other organizations.

Al-Jadaan said that the G20 dealt seriously with climate change, and supported the carbon economy initiatives, and will continue to do so, in addition to supporting many efforts within carbon-neutral energy. He added that the Kingdom of Saudi Arabia produced the first clean hydrogen, which will be shipped to Japan.

During our presidency, several new initiatives have been proposed for the first time in the group’s history and successfully achieved,” he said, spelling out that there is no plan in the short term to reconsider value-added tax but it will be periodically discussed according to economic and financial developments.

The minister suggested that the Saudi and the world economy share suffering, citing that the G20 has discussed the same concerns of the Kingdom.

Al-Jadaan stated that Saudi Arabia, as president of G20, took bold and fast measures to confront COVID-19 at the national level, benefiting from its Vision 2030. He pointed out that the Kingdom launched 150 initiatives with a cost of more than 200 billion riyals in support of its citizens, health sector and small and medium sectors to cope with the repercussions of the pandemic.

For his part, the Saudi G20 Sherpa, Dr. Fahad bin Abdullah Al-Mubarak, affirmed the success of the two summits, as the group was keen to deal with the pandemic. Therefore, the group worked with the WTO with the aim of saving the world from the repercussions of the pandemic that caused the closure of borders among the countries, a matter that would have negatively affected the peoples without exception. This was avoided in this coordination with the WTO, pointing out that this is not enough, as the restructuring of the Organization is the goal to achieve better outcomes in the future, and this is evidence of the success achieved by the G20 in various trends.

The Saudi official stated that the three trade ministers’ meetings focused on the continuity of job creation and economic growth in all countries, especially those with limited capabilities. He outlined the summit achievements, including debt suspension initiatives, dealing with climate change seriously, combating corruption, water purification and desalination, combating desertification, and protecting coral reefs.