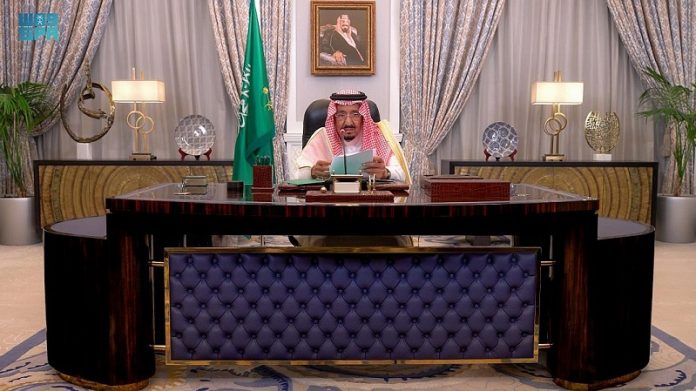 Muslims around the world celebrate Eid al-Adha, an Islamic festival to commemorate the willingness of Ibrahim to follow Allah’s  command to sacrifice his son Ismail.

King Salman addressed citizens and Muslims worldwide on this occasion that marks the culmination of the rituals of the annual Hajj, organized this year under tight precautionary measures with the participation of 60,000 pilgrims from Saudi citizens and residents inside the Kingdom to curb the spread of COVID-19 pandemic.

The following is the full speech of the Custodian of the Two Holy Mosques:

I thank Allah Almighty for the great success of the Kingdom’s efforts in reducing the effects imposed by the COVID-19 pandemic on all aspects of life and works to increase society immunity by providing more than 22 million doses of COVID-19 vaccine to citizens and residents, which contributed to raising the operational capacity of the Two Holy Mosques and enabling those who visit them to perform rituals in a healthy and safe environment.

I praised the great awareness of visitors to the Two Holy Mosques for their commitment to the precautionary measures, and one of the most important results was that more than seventeen million beneficiaries of government applications launched during the pandemic have been able to perform Umrah, and pray in the Two Holy Mosques with ease and tranquility, safe from the effects of the spread of COVID-19.

In view of the world is going today through the spread of the COVD-19 and its continuous mutation, and emanating from our concern for the safety of pilgrims, and contributing to besieging this epidemic and preventing its spread, the Kingdom of Saudi Arabia has taken a set of organizational and preventive measures during this year’s Hajj season, as required by the regulations as per international health standards, and the authorities concerned with serving pilgrims have implemented the digital Hajj system, which aims to focus on technology and reduce human cadres in crowd management and organizing Hajj, to ensure the safety and health of pilgrims, and the safety of personnel working in the service of pilgrims, the official authorities in the Kingdom of Saudi Arabia will continue to evaluate health conditions and take all measures to preserve public health with the help of Allah Almighty.

The Islamic cooperation has resulted in the success of holding this year’s Hajj season, through the solidarity of the sisterly Islamic countries in which they have always been accustomed, and the concerted religious bodies that supported and valued the measures taken by the Kingdom of Saudi Arabia in Hajj this year, thus contributing to the protection of pilgrims, and preventing the spread of the epidemic and emanating from our concern, the Kingdom of Saudi Arabia has held the fifth pillar of Islam in light of this pandemic and many measures necessitated, it has taken into account that the segments of pilgrims represent all Islamic countries and our brothers and sisters residing on the land of the Kingdom of Saudi Arabia, to give the opportunity for all nationalities to perform Hajj, and perform their rituals with ease, safety and security.

I praise and thank Allah Almighty for the honor that this blessed country has been bestowed on serving the Two Holy Mosques and their visitors to the fullest, and for success in managing the Hajj and Umrah seasons in light of this pandemic and the restrictions and effects that it imposed on the entire world, I also thank the personnel who are stationed to ensure the safety of the pilgrims, and also to the workers and volunteers in all government and private sectors who contributed to the success of this year’s Hajj season.

I pray to Allah Almighty to accept their Hajj and from all Muslims their good deeds, and bring this blessed Eid back to the Islamic nation in security, stability, safety, and prosperity, and every year and you are well.