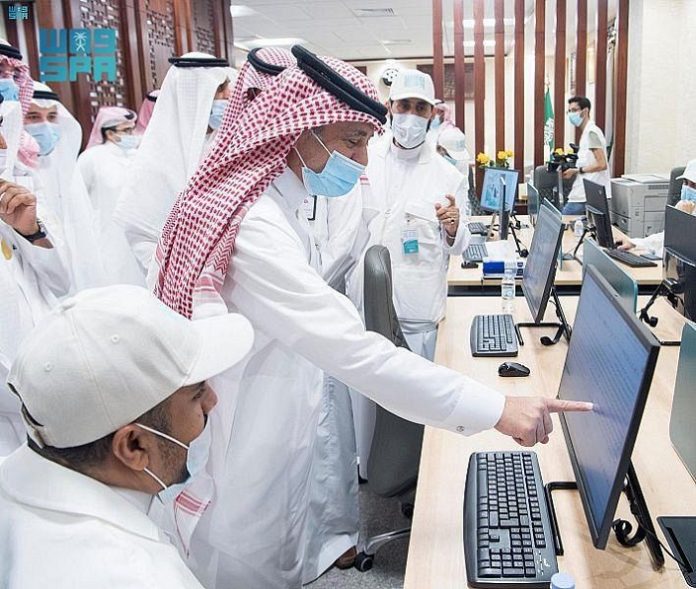 Makkah (UNA-OIC) – In the context of strengthening cooperation between the Saudi Press Agency (SPA) and Umm Al-Qura University, Acting Media Minister Dr. Majid Al-Qasabi inaugurated the headquarters of the SPA Media Center at the university, which was established to enhance coverage of this year’s Hajj season.

During his tour, Al-Qasabi was briefed on the progress of work in the center and the modern media technologies it includes, the new digital media platform and the accounts of communication sites in multiple languages, as the SPA team works on producing media materials, including news, reports and field stories in various aspects of media activities enhanced with supporting media.

The acting media minister was also viewed the presentation made by Director General of the News, Head of the SPA Mission during the Hajj season Mohammed Al-Mazyad. The presentation included statistics on the news content that was broadcast on the Hajj season and the efforts and services provided by the Hajj-related authorities.

At the end of his tour, Al-Qasabi met with the SPA team at the center, where he commended their efforts in proactive and field coverage during the Hajj season.

He also met with a number of university officials and urged them to make utmost efforts to highlight Saudi Arabia’s role in serving the pilgrims, and to reflect the honorable image of the various sectors participating in the Hajj activities, in order to live up to the directives of the wise leadership, and to show the Hajj rituals and the tolerance of Islam in addition to promoting the values tolerance and moderation.

The minister applauded the achievements made by Umm Al-Qura University and its permanent cooperation with the media system in all fields, especially what concerns Hajj and Umrah, including the Institute of Research and Consulting Studies and the Hajj Research Institute of the university.

Al-Qasabi called for making further efforts to convey the Kingdom’s message to the world in different languages.

He expressed his thanks and appreciation to Umm Al-Qura University President Prof. Moaddi bin Muhammad Aal Madh-hab, the deans of the faculties and the employees of the university administration for their initiative to establish the media center at the university to support the work of the Saudi Press Agency.