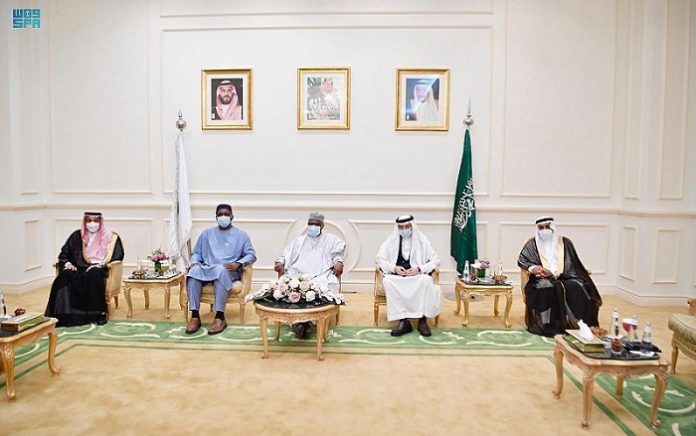 Jeddah (UNA-OIC) – The Permanent Mission of Saudi Arabia to the Organization of Islamic Cooperation (OIC) and the Directorate General of the Saudi Ministry of Foreign Affairs Makkah Region Branch held a lunch banquet in honor of OIC Secretary-General elect Ambassador Hissein Brahim Taha.

The event was held on Monday in the presence of OIC Secretary-General Dr. Yousef bin Ahmed Al-Othaimeen, Secretary-General of the International Islamic Fiqh Academy (IIFA) Dr. Koutoub Moustapha Sano, as well as Permanent Representatives of the OIC Member States and senior officials of the Jeddah-based Organization.

The invitees were received by Saudi Permanent Representative to the OIC Dr. Saleh bin Hamad Al-Suhaibani, and Director-General of the Foreign Ministry Branch in Makkah Region Mazen bin Hamad Al-Hamali, at the branch headquarters in Jeddah Province.

Al-Suhaibani welcomed Ambassador Taha and wished him every success in his new post, which he will take over next November. He also expressed the hope that the Secretary-General elect would work to continue achieving success and progress in issues of concern to the OIC Member States, and in ways to enhance cooperation and coordination among the various organs of the Organization.

At the same time, the Saudi permanent representative commended the good efforts made by Al-Othaimeen, during his tenure as the OIC Secretary-General.

Al-Suhaibani stressed the keenness of the Saudi Permanent Mission, in cooperation and coordination with the Ministry of Foreign Affairs, Makkah Branch, to hold this banquet to welcome the OIC Secretary-General, and to consolidate horizons of communication and support coordination and consultation between the permanent representatives and the specialized, subsidiary and affiliated bodies of the Organization.

He added that the event served as a departure point for coordination and consultation to advance the efforts and achieve the aspirations of the OIC, as the world’s second-largest intergovernmental organization covering four continents, as well as being the collective voice of the Muslim countries and the main umbrella for coordinating joint Islamic action.

The Saudi permanent representative also restated the importance of continued cooperation to ensure the unification of Islamic positions and the achievement of common interests. He further expressed appreciation for the unremitting efforts of the OIC General Secretariat to achieve its objectives despite the great challenges it faces.

In the same context, Al-Suhaibani affirmed the keenness of the Kingdom of Saudi Arabia, the OIC headquarters country, on providing constant support to the Organization, in order to achieve its objectives and strengthen the bonds of brotherhood and solidarity among its member states, in addition to addressing the challenges facing the Islamic world, in particular, and the international community, in general.

It is noteworthy that Ambassador Hissein Taha of Chad was elected for the post of OIC Secretary-General last November, during the 47th Session of the Council of Foreign Ministers in Niamey, Niger, as a representative of the African Group, in accordance with the equitable geographical distribution of the OIC General Secretariat’s rotation. Taha will assume the role of OIC Secretary-General for a five-year term starting next November 2021.