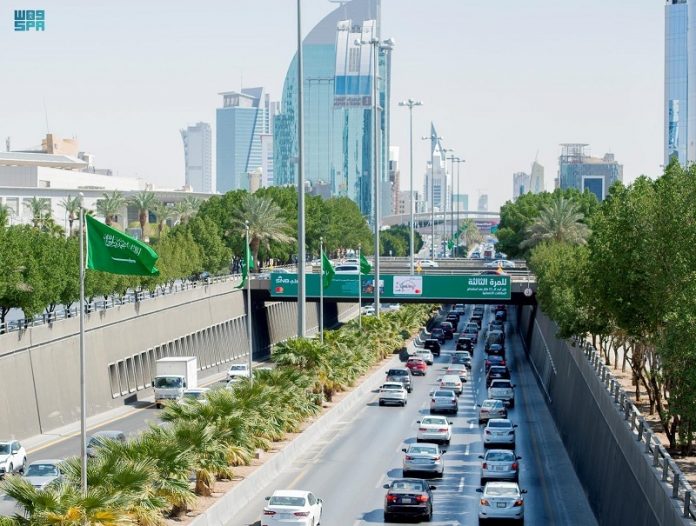 These achievements are the result of the ambitious visions led by Crown Prince Mohammed bin Salman Al Saud, and the loyal Saudi people who are working tirelessly to build a comprehensive renaissance and a prosperous nation that will inevitably be the beacon of the East.

In its 91st anniversary, Saudi Arabia continues to play prominent roles in various international organizations and through many partnerships. These roles and partnerships have placed the Kingdom in a key position in making and strengthening peace internationally. This has actually been brought into reality as the Kingdom has injected billions of dollars in the economies of several countries and hosted various rival parties in an effort to unify their positions, renounce hate speech and stop fighting. Also, the Kingdom has been offering billions of dollars in relief assistance to many afflicted countries around the world.

Proceeding from its Arab and Islamic role and position, Saudi Arabia is also working at the political and economic levels in a key position to promote peace and unify discourse at both Arab and Islamic levels, as well as to enhance bridges of communication between Arab and Islamic peoples and other peoples of the world, and contain the crises that arise amongst them.

In light of the coronavirus pandemic, which has caused the death of millions of people across the world and harmed global economies, Saudi Arabia has intensified its humanitarian efforts to assist many countries throughout the world to overcome this crisis by providing various forms of medical supplies, COVID-19 vaccines and economic assistance.

As part of these efforts to contain the pandemic and help the least developed countries (LDCs) reduce its repercussions, the Kingdom has donated SAR 20 million to support the initiative of the Organization of Islamic Cooperation (OIC) to provide COVID-19 vaccines for two categories, namely health workers and the elderly in the OIC-LDCs, numbering 22 countries, including the State of Palestine.

At the level of international issues as well, the Kingdom was keen to contribute strongly to confronting climate change by launching global initiatives in its dimension and field of application, such as the Green Middle East Initiative that aims, in partnership with the Middle Eastern countries, to plant 50 billion trees as the world’s largest reforestation program to face environmental challenges, improve the quality of life in the region, and curb global carbon dioxide emissions.

Internally, the Kingdom has unveiled the “The Line” project, to build a 170-kilometer-long carbon-free city for one million residents. It will be the first large-scale urban development designed since the beginning of the digital age and artificial intelligence, as part of the Kingdom’s Vision 2030 to improve the quality of life in Saudi Arabia.

Economically, the Kingdom has pursued efforts to stabilize global oil markets by supporting existing agreements in this aspect, and by offering voluntary initiatives to reduce production.

Despite what the world is going through in light of the coronavirus pandemic, Saudi Arabia has impressed everyone with its ability to recover quickly, as reports of international economic organizations indicate that the Saudi economy will grow by 2.4 percent this year, and 4.8 percent during 2022. The organizations attributed these positive outlooks to the Saudi Arabia’s continued implementation of the programs of its Vision 2030, which is based on diversifying the economy that leads to the permanence of economic resources and financial sustainability.

Digitally, giant leaps and qualitative projects have transformed the Kingdom, within a few years, to the ranks of advanced countries in the digital field, making it occupy advanced ranks in several global digital indicators, including cybersecurity, technical development, global competitiveness, digital structure within the development of digital government, capabilities and human capital, e-government, and mobile internet speeds.

In the humanitarian field, Saudi Arabia has continued its leadership in voluntary and humanitarian work. The kingdom has spared no effort to extend a helping hand to the needy people everywhere. In fact, the Kingdom’s Vision 2030 has emphasized the development of charitable and humanitarian work, as well as raising the number of volunteers from 11,000 to one million volunteers.

When talking about humanitarian action, it is worth mentioning King Salman Humanitarian Aid and Relief Center (KSRelief), which was established to be a leading center for relief and humanitarian action and to convey the Saudi Islamic values to the world, in addition to managing and coordinating relief work at the international level to ensure support for the affected groups.

So far, KSRelief has implemented 1,727 humanitarian and relief projects worth $5.5 billion in several areas, including food security, health, water and environmental sanitation, shelter, and education.