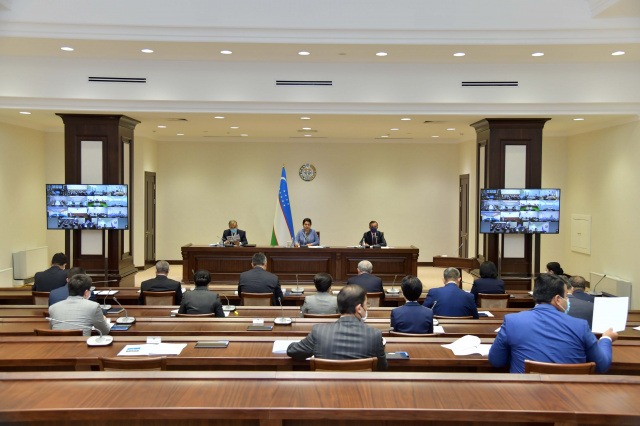 On June 19, 2020, Tashkent hosted the fifth plenary session of the Senate of the Oliy Majlis of the Republic of Uzbekistan.

The meeting was attended by members of the government, heads of ministries and agencies, representatives of the media.

The plenary session, held via videoconference, was chaired by the Chairperson of the Senate of the Oliy Majlis Tanzila Narbayeva.

At the plenary session, members of the Senate discussed 16 issues, including 9 laws.

Senate members discussed the Law of the Republic of Uzbekistan “On innovation activities”, “On ratification of the Protocol on introducing amendments to the Agreement between state members of the Shanghai Cooperation Organization on conducting joint military exercises of June 27, 2007 (Bishkek, April 29, 2019)”, “On the accession of the Republic of Uzbekistan to the Protocol for the Prohibition of the Use in War of Asphyxiating, Poisonous or Other Gases, and of Bacteriological Methods of Warfare (Geneva, June 17, 1925)” and others.

The issue of the appointment of the Ambassador Extraordinary and Plenipotentiary of the Republic of Uzbekistan to the State of Israel was considered.

Senators adopted a resolution on the appointment of Feruza Yuldashevna Makhmudova to the post of Ambassador Extraordinary and Plenipotentiary of the Republic of Uzbekistan to the State of Israel.