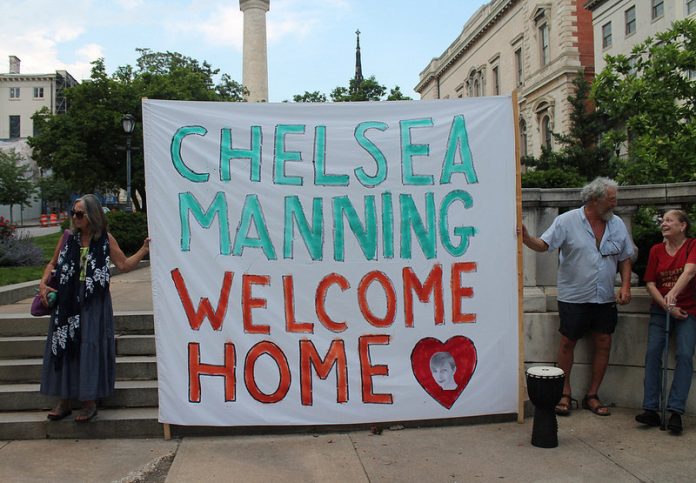 The top Democrat on the Senate Foreign Relations Committee, Ben Cardin, has become a big star in national media by routinely denouncing Russia as a dire threat to American democracy. The senior senator from Maryland personifies the highly dangerous opportunism that has set in among leading Democrats on the subject of Russia.

Chelsea Manning confirmed on Sunday that she is challenging Senator Cardin’s re-election effort in the Democratic primary this June. Her campaign has real potential to raise key issues. One of them revolves around the kind of bellicose rhetoric that heightens the dangers of conflict between the world’s two nuclear superpowers.

In a typical foray into reckless hyperbole, Cardin told a public forum in November: “When you use cyber in an affirmative way to compromise our democratic, free election system, that’s an attack against America. It’s an act of war. It is an act of war.”

Cardin is far from the only member of Congress to use “act of war” rhetoric about alleged Russian cyber actions. Republican ultra-hawk Arizona Senator John McCain has hurled the phrase at Russia. But the most use of the phrase comes from a range of Democrats, such as Connecticut Senator Richard Blumenthal and the normally sensible Northern California Representative Jackie Speier.

As his party’s ranking member of the key Senate committee on foreign policy, Cardin is at the tip of the anti-Russia propaganda spear. After three decades in Congress including nearly a dozen years in the Senate, he’s an old hand at spinning. No one has worked harder to get political mileage out of “Russiagate.”

Last week, Cardin upped the ante with the release of a report that he commissioned. In effect, it’s a declaration of red-white-and-blue jihad against Russia.

The report — which accuses Russian President Vladimir Putin of “a relentless assault to undermine democracy and the rule of law in Europe and the United States” — received massive coverage in U.S. news media. Conservative and liberal punditry voiced acclaim.

“Never before in American history has so clear a threat to national security been so clearly ignored by a U.S. president,” a solo statement by Cardin declares on the opening page. With the truly repugnant President Trump in its crosshairs, the report’s most polemical claims — no matter how debatable or ahistorical — have predictably gotten a pass from mass media.

But the much-ballyhooed report is a carefully selective and distorted version of history.

The expansion of NATO up to Russia’s borders, the U.S. interference in dozens of countries’ elections (including in Russia during the Clinton administration), Washington’s support for repressive regimes in the past and present — such realities didn’t merit consideration or mention. Nor did facts such as the USA’s role as the world’s biggest arms merchant. Or the aggressively deadly U.S. military interventions in the recent past and present, from Afghanistan to Iraq to Libya.

Such omissions are essential to the self-righteous tone of the Russiagate frenzy. Only with silence about basic truths of U.S. foreign policy can officials in Washington pose as leaders of an angelic nation that must confront satanic Russia.

In light of what is at stake for human survival — with the odds of nuclear war shifting ominously because of the agenda that he’s helping to push — Senator Cardin can be understood as someone who avidly fits into patterns of nationalistic and militaristic madness. The sad fact is that he has plenty of company on Capitol Hill. Lemmings are bad enough, but conformists who would drag all of humanity over the cliff with them are far worse.

Democratic leadership used to be much saner. Five decades ago, it was the fanatical Republican standard-bearer Barry Goldwater who scorned reaching out to the Kremlin – while Democratic President Lyndon Johnson wisely sought détente with Russian leaders on behalf of peaceful coexistence and reducing the risks of nuclear conflagration.

Right after being sentenced to prison in August 2013 for heroic whistleblowing that exposed many U.S. war crimes, Chelsea Manning released a statement that quoted Howard Zinn: “There is not a flag large enough to cover the shame of killing innocent people.” A nuclear war between the United States and Russia would do more than kill vast numbers of innocent people. Scientific research tells us that a nuclear holocaust would make the Earth “virtually uninhabitable.”

The extreme hostility toward Russia that makes such an outcome more likely must be rejected. Senator Ben Cardin is one of the loudest and most prominent voices for such hostility. He should be challenged.