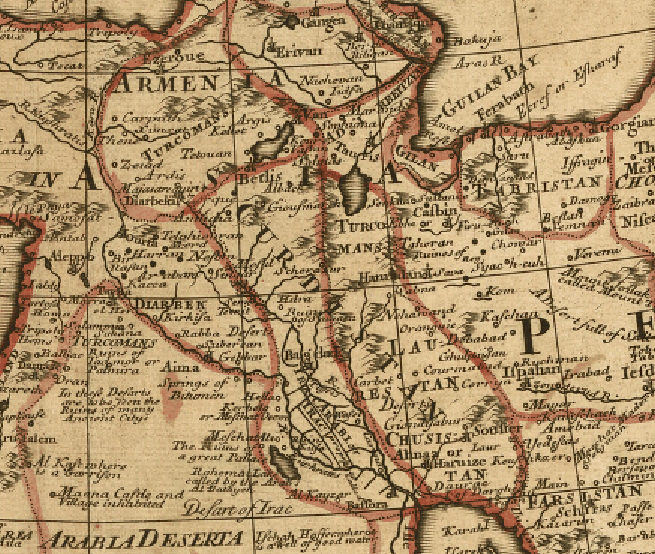 JUST IMAGINE: A new movement among the Mizrahim is born in Israel.

It declares that all the existing organizations of Mizrahim (Oriental Jews) are phony. That they are all instruments of the Ashkenazi (European Jewish) elite to keep the Mizrahim in subjugation. That the Oriental Shas party is a joke, especially since the death of Rabbi Ovadia Josef, who was an authentic Mizrahi leader.

It says the Likud is the most cunning instrument for keeping the Mizrahim down. That the endless rule of Binyamin Netanyahu, the very personification of the Ashkenazi elite, symbolizes the powerlessness of the ignorant Mizrahi masses, who keep him and his entire Ashkenazi gang in power.

SO a new Mizrahi party is set up, led by energetic young people who put forward a shocking revolutionary idea: separation.

Their plan is to partition the State of Israel along the Jaffa – Jerusalem road, dividing the country into two halves. Everything north of the dividing line will remain the property of the Ashkenazis, everything south of it will become the new sovereign Mizrahi state, to be called Medinat Mizrah.

From there, your imagination can lead you anywhere you want.

WHERE WOULD I stand in such a situation? Asking myself seriously, I find myself in a very ambiguous situation.

I am an Ashkenazi. As Ashkenazi as you get. I was born in Germany. My family had been there for ages. But I never defined myself as such. The very idea of being “Ashkenazi” is completely alien to me.

More so, I have a very deep attachment to the Mizrahi society. I had it even before four young recruits from Morocco risked their young lives to save my life in the 1948 war. I was attached to Oriental culture from early childhood.

So, confronted with a vigorous Oriental separation movement, where would I stand? Frankly, I do not know. I certainly would not send the Israeli army and police to put it down. That would be impossible anyhow, considering that most soldiers and police are themselves Mizrahim.

Fortunately, the whole idea is preposterous. Can’t happen. Even less than Kurdish or Catalonian separation.

CURIOUSLY ENOUGH, the Kurds and the Catalans are two peoples I have always liked.

I don’t know when I started to like the Kurds or why. In my youth, Kurds were considered nice but primitive. The saying “Ana Kurdi” (Arabic for “I am a Kurd”) meant that I am a simple person who fulfils his task without asking questions.

In the 1950s I came to know a semi-clandestine cell of Egyptian Jewish émigrés in Paris. They assisted the Algerian struggle for independence – a cause which I fervently supported myself. Its leader was Henri Curiel, and one of its members was a young Egyptian Jewish woman, Joyce Blau, who was also an ardent supporter of the Kurdish cause. This was also the field of her academic studies.

Through her, I learned more about the Kurdish story, or tragedy. Though Kurdistan is a compact territory, it is divided into pieces that belong to different states – Turkey, Iran, Iraq and Syria, with more communities dispersed in other countries.

At the end of World War I, there was an effort to set up a Kurdish state, but the rapaciousness of the victors and the re-emergence of a strong Turkey made this impossible. The Kurds themselves were not completely blameless: they were and are consistently unable to unite. Their leading families act against each other.

As a member, I had some unforgettable experiences. Twice I was invited to address mass meetings of Kurds in Germany. Mass meetings in the literal sense: huge numbers of Kurds from all over Europe cheered my speech, quite a boost for my ego.

My efforts petered out when I discovered that high-level Israeli army officers were already in Iraqi Kurdistan, helping to train the Peshmerga (“Before Death”) guerrillas. The motive of the Israeli government in sending them there was quite cynical: to undermine the Iraqi state, according to the eternal Roman maxim “Divide et Impera”, divide and rule.

How did they get there? Easy, they were under the benevolent protection of the Shah of Iran. But one day the Shah made peace with Saddam Hussein, and that was the end of this particular Israeli project. When the Shah was toppled and Iran became Israel’s deadly enemy, Israeli military intervention in Kurdistan became impossible.

But the sentiment remains. I believe that the Kurds deserve independence, especially if they are able to unite. Since they are blessed – or cursed – with oil riches, foreign interests are deeply involved.

THERE IS no similarity whatsoever between the Kurds and the Catalans, except that I like them both.

Catalonia is a highly developed country, and during my several short visits there I felt quite at home. Like all tourists, I strolled in the Rambla of Barcelona – both Hebrew names, so it seems. They are remnants from the times when Spain was a colony of Carthago, a city founded by Semitic people from Phoenicia, who spoke a kind of Hebrew. Barcelona is probably derived from Barak (lightning in Hebrew), and Rambla from the Arabic Ramle (sandy.)

Trouble is, I also love other parts of Spain, especially places like Cordoba and Sevilla. Would be a pity to break it up. On the other hand, one cannot really prevent a people from achieving its independence, if it wants to.

Fortunately, nobody asks me.

THE LARGER question is why smaller and smaller peoples want independence, when the world is creating larger and larger political units?

We in this generation are witnessing the end of the nation-state, which has dominated world history for the last few hundred years. It was born out of necessity. Small countries were unable to build modern mass industries which depended on a large domestic market. They could not defend themselves, when modern armies required more and more sophisticated weapons. Even cultural development depended on larger language-areas.

So Wales and Scotland joined England, Savoy and Sicily created Italy, Corsica and the Provence joined France. Small nationalities joined larger ones. It was necessary for survival.

History is moving on, and now even the nation-State is not large enough to compete. States unite in ever-larger units, such as the European Union. I have no doubt that by the end of this century, there will be in place an effective world government, turning the entire world effectively into one state. (If some extra-terrestrials threaten this world, it will help.)

So how does the separation into smaller and smaller states fit this trend? Simply, if the state of Spain is not necessary anymore for economic and military purposes and its central functions are moving from Madrid to Brussels, why shouldn’t the Catalans and the Basques secede and join the Union under their own flags? Look at Yugoslavia, look even at the Soviet Union. Germany is the great exception but it is quite large by itself.

The two processes are not contradictory, they complement each other.

The idiotic Brexit is ahistorical. But if the Scots and the Welsh want to separate from England, they will succeed.

I have great respect for the power of nationalism. In our era, it has proved, to be stronger than religion, communism or any other creed. It is strongest when it combines with religion, as in the Arab world. So the nationalism of small peoples will gain satisfaction in football games, while the real business will be conducted elsewhere.

AT THIS very moment, the Israeli Parliament, the Knesset, is busy with enacting a new law, called the Nation Law, which is intended to make clear that the Jewishness of the Jewish State takes precedence over democracy and human rights.

Israel has no constitution, but until now it was assumed that Israel was equally “Jewish” and “democratic”. The new law is about to abolish that notion.

As usual, we are one or two centuries behind world history.