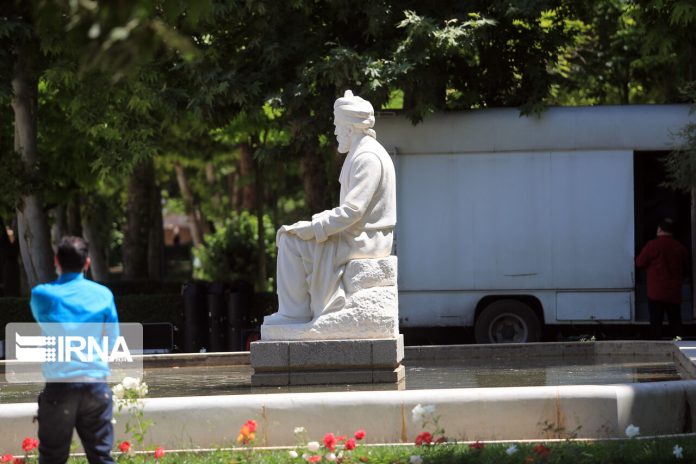 In the second edition of the webinar on Ferdowsi Day held by IRNA’s Research Department which was dedicated to mutual effect between the Shahnameh and the art of calligraphy in Iran, Moradi who is a master of Persian calligraphy said that fewer distinguished calligraphers have been attracted to fully transcribe the Shahnameh because of its considerable volume.

May 15 has been marked the Day of Ferdowsi in Iran and many various events are held to commemorate the 11th-century poet who created the Shahnameh, a versed epic depicting the history of ancient Persia and its great kings and legendry figures.

Moradi said that the lack of attraction to make calligraphic copies of the Shahnameh caused Shah Tahmasp I, the 16th century Safavid king, to gather number one calligraphers of the time together and provide them with funds for 20 years to create what is today known as the most precious copy of the Shahnameh which was written in calligraphy style decorated with Persian miniature paintings on expensive papers.

Only 118 pages of that copy have survived, according to Morady, and they are priceless that one page was sold in Christie’s for 15 million dollars.

Andre Galestian, a music researcher and university professor, who has also taken part in the webinar, said that the Shahnameh had a great impact on poets both in Iran and abroad.

He said tens of Iranian poetry and literary figures, including Naser Khosrow, Sanaei, Anvari, Khaqani, Rumi, Sadi, Hafez, Jami, Ibn Yamin and Ubeid Zakani in varied periods in the centuries past and many others in recent history have been influenced by the Shahnameh.

The Shahnameh of Ferdowsi has been translated into different languages and influenced many literary works, according to Galestian. He said the 13th-century Armenian poet, Konstantin Yerzen Galasy, asked to read his poems like that of Ferdowsi and translated some parts of the Shahnameh.

Vasily Zhukovsky, the 19th-century Russian poet, wrote a story based on the Shahnameh figures Rostam and Sohrab and Christian Johann Heinrich Heine gave a versed account of Ferdowsi’s life.

French poet François Coppée, French novelist Maurice Barrès, French author and poet Alphonse de Lamartine, English poet Matthew Arnold and many other Western literature figures have written about Ferdowsi and his Shahnameh, Galestian said, adding that there also tens of statues of Ferdowsi in diverse cities around the globe.

On the impact of Ferdowsi and his Shahnameh on Iran’s culture, Moradi said that Persian literature owes its continuance to Ferdowsi and Iran owes its existence to the Shahnameh.

He underlined that Shahnameh has preserved the foundations of Iranian culture, despite the fact that has been created for humanity, not only for Iranians. Experts agree that the Shahnameh of Ferdowsi is the greatest epic work in world history and it is only comparable to Homer’s Iliad and Odyssey

On the influence of the Shahnameh among the new generations, Galestian said that the Shahnameh has enough capacity to be influential, but Iranian authors and musicians must pay more attention to the work.

The same as we see Rostam and Sohrab Opera being composed and performed, said Galestian, we can also see many parts of the Shahnameh be used in other types of music like pop and it can also be seen in other fields of arts, like painting and miniature.