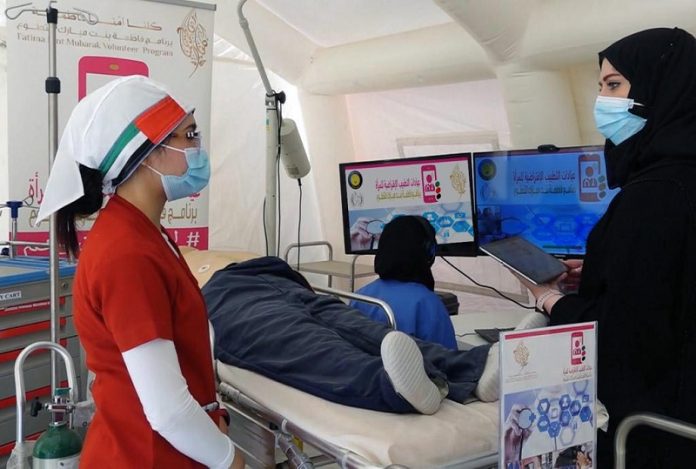 Abu Dhabi (UNA-OIC) – The first Sheikha Fatima Global Virtual Humanitarian Campaign to treat hundreds of women in Sudanese villages began under the slogan, “Do Not Worry”.

The campaign is being supervised by Emirati and Sudanese doctors volunteering at the Sheikha Fatima bint Mubarak Volunteering Program, and is the first smart initiative of its kind specializing in health volunteering.

The inauguration of the telemedicine campaign in Sudan is one of the humanitarian initiatives launched as part of the directives of Sheikha Fatima bint Mubarak, Chairwoman of the General Women’s Union (GWU), President of the Supreme Council for Motherhood and Childhood, and Supreme Chairwoman of the Family Development Foundation (FDF), which have encouraged and enabled doctors to serve local and international communities.

GWU Secretary General Noura Al Suwaidi stated that the campaign has attracted young medical cadres from the UAE and Sudan and enabled them to provide humanitarian telemedicine services in many Sudanese villages, including the best diagnostic, treatment and prevention services, to over 500 women suffering from chronic or communicable diseases, by connecting the telemedicine center in Abu Dhabi to field clinics and hospitals in Sudanese villages via video conferencing.

Health Minister of Sudan’s Northern State Dr. Aba-Zar Mohamed Ali thanked the UAE’s government and people for supporting Sudan, especially the country’s health sector while commending the virtual humanitarian initiatives of the “Mother of the UAE,” which have found realistic solutions to issues affecting women by using telemedicine.

Reem Othman, Ambassador of Humanitarian Action and CEO of Saudi-German Hospitals Group in the UAE, highlighted the importance of the initiative, which is the first virtual humanitarian platform of its kind that interactively provides health information and instructions on various chronic and viral diseases through volunteer doctors.

Al Anoud Al Ajami, Executive Director of the Zayed Giving Initiative, stressed that the campaign will witness the participation of more specialist medical cadres and the launch of twice as many telemedicine initiatives, to reach out to the largest possible number of patients in Sudan villages, in coordination with the Ministry of Health of Sudan and relevant Emirati and Sudanese organizations.