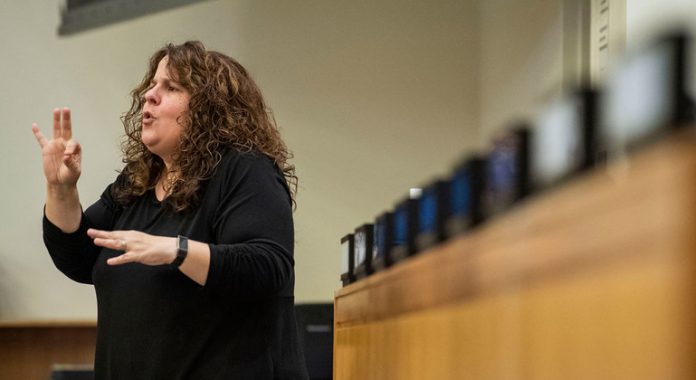 In his message for the day, Secretary-General António Guterres expressed encouragement that some countries have been providing public health announcements and information on COVID-19 with national sign language interpretation.

And he repeated his call for COVID-19 response and recovery measures to be “accessible to all”.

The UN Disability Inclusion Strategy, which was launched last year, aims to strengthen efforts for the meaningful participation and full inclusion of people with disabilities “in all that we do, including in times of crisis”, the top UN official explained.

He elaborated by calling it “the only way” to fulfil the central promise of the 2030 Agenda to leave no one behind.

“On this International Day of Sign Languages, I call on all local, national and global leaders to protect and promote the diversity of sign languages and cultures, so that every Deaf person can participate in and contribute to society and reach their full potential”, upheld the Secretary-General.

I call on all local, national and global leaders to protect and promote the diversity of sign languages and cultures — UN chief

According to the World Federation of the Deaf, there are approximately 72 million worldwide – more than 80 per cent of whom live in developing countries – and collectively, they use more than 300 different sign languages.

The UN maintains that International Day of Sign Languages offers a unique opportunity to support and protect the linguistic identity and cultural diversity of deaf people and other sign language users.

Later this year the World Federation of the Deaf will issue a Global Leaders Challenge to promote the use of sign languages by local, national and global leaders in partnership with national associations of deaf people and deaf-led organizations in each country.

A sign language interpreter translates for actor Daryl Mitchell (seated) during a special event at the UN.