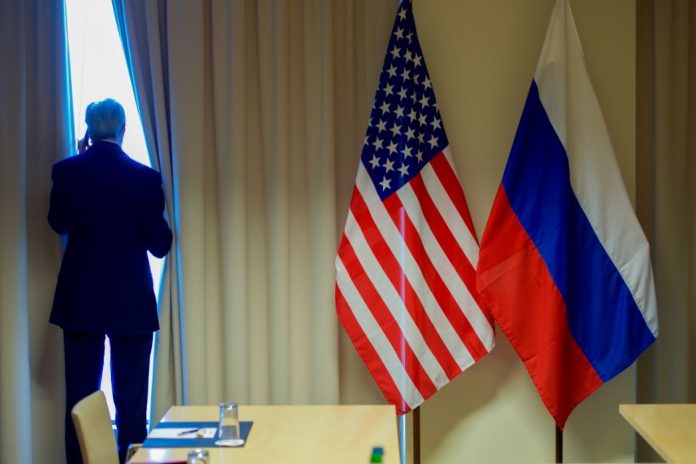 For several months we’ve been hearing a crescendo of outcries that Russia used social media to sway the 2016 presidential election. The claim has now been debunked by an unlikely source — one of the most Russiagate-frenzied big media outlets in the United States, the Washington Post.

Far away from the media echo chamber, the Post news story is headlined: “There’s Still Little Evidence That Russia’s 2016 Social Media Efforts Did Much of Anything.”

The article focuses on “what we actually know about the Russian activity on Facebook and Twitter: It was often modest, heavily dissociated from the campaign itself and minute in the context of election social media efforts.”

In fact, the ballyhooed Facebook ads were notably not targeted to be seen in swing states, the piece by Post journalist Philip Bump reports. As for the much-hyped tweets, they were smaller than minuscule in quantity compared to overall election-related tweets.

But don’t expect the fervent canard about Russian manipulation of social media to fade away anytime soon. At this point, the Russiagate atmosphere has become so toxic — with incessant propaganda, credulity, fear-laced conformity and partisan opportunism — that basic logic often disintegrates.

One of the weirdest aspects of claims that Russia undermined the election with social media has involved explaining away the fact that few of the ads and posts in question actually referred to Hillary Clinton, Donald Trump or the election. Instead, we’re told, the wily Russians tried to help Trump by inflaming social divisions such as racial tensions. It’s a rampant storyline (rendered here by NBC News political director Chuck Todd) that’s reminiscent of the common claim during the civil rights movement that “outside agitators,” such as Russian-directed reds, were inflaming and exploiting racial tensions in the South.

From there, it’s just a hop skip and jump to smearing Americans who dissent from U.S. orthodoxies as useful idiots who serve the interests of plotters in the Kremlin.

Of course, history is not exactly repeating itself, but it’s rhyming an awful lot. There are real parallels between the McCarthy Era and today’s anti-Russia fervor in the United States.

Despite all the information and analysis that have strengthened progressive understanding in this country during the last few decades, fixating on Russia as culpable for the election of Trump has been widely irresistible. Perhaps that fixation is less upsetting than deeper realization of just how rotten the U.S. corporate system of injustice has become — and how the forces that brought us the horrors of the Trump presidency are distinctly homegrown.

Narratives scapegoating Russia now have an extremely powerful grip on the USA. The consequences include heightened U.S.-Russia tensions that absolutely mean heightened risks of nuclear war — and worsening threats to democratic discourse at home.

The conditioned reflex to label as somehow “pro-Putin” any opinion that overlaps with a Kremlin outlook is becoming part of the muscle memory of much of the American body politic. Countless journalists, pundits, activists and politicians have fallen under the Russiagate spell. They include the liberal primetime lineup on MSNBC, where — as the media watchdog group FAIR pointed out last month — Rachel Maddow and Chris Hayes routinely bypass stories of great importance in order “to lead with minutiae from the ongoing Russia investigation that has consumed MSNBC‘s coverage like no other news event since the beginning of the Trump presidency.”

Across most of the media landscape, the meme that Russians attacked American democracy with social-media posts has been treated as self-evident.

In a typical exercise of the conformity that afflicts the national press corps, the Washington bureau chief for Mother Jones magazine, David Corn, wrote this fall that the House intelligence committee needed more staff to investigate, in his words, “how” — not whether — “a foreign adversary attacked American democracy.” His piece breathlessly declared that “the Trump-Russia scandal” was “expanding — it now includes new revelations regarding Moscow’s use of social media in the United States to influence the 2016 campaign.”

That kind of stenography for a powerful spin may snag cable TV appearances and lucrative book contracts, but it’s a notable disservice to journalism and democracy.

Meanwhile, most Democrats on Capitol Hill are eager to engage in such rhetoric. So, it was just another routine appearance when Senator Richard Blumenthal went on CNN a week before Christmas and declared “there is increasing evidence that the Russians are continuing their attack on our democracy.” He said: “The Russian attack on our elections in 2016 was endlessly ingenious and inventive, using all kinds of social media, all kinds of intermediaries, sources of information for them.”

To put it mildly, that sort of bombast gains vastly more airtime than discussing the urgent need for détente between the world’s two nuclear superpowers.

On MSNBC, Rachel Maddow has climbed with her ratings to great mass-media acclaim, while advancing herself from the outset of the Trump presidency as one of the most prominent and irresponsible Russia baiters in U.S. media. At this rate, when Maddow retires — if she and the rest of us are lucky enough to avoid a nuclear holocaust — she can look back on a career that deteriorated into an obsessive crusade against Russia that increased the chances of World War III.

In the poisonous media environment that keeps boosting her fame and fortune, it’s grotesquely fitting that Maddow — time after time after time — has devoted so much of her program to the illusory Russian assault on democracy via social media.

That’s the way it goes in the propaganda-polluted land of Russiagate.

ABOUT US
Media Monitors Network (MMN) is a non-profit, non-partial and non-political platform for those serious Media Contributors and Observers who crave to know and like to help to prevail the whole truth about current affairs, any disputed issue or any controversial issue by their voluntary contributions with logic, reason and rationality.
Contact us: edit[email protected]
FOLLOW US
Copyright © 2000 - MMN International Inc. All rights reserved.
Reproduction in whole or in part without permission is prohibited.
All other brands, logos, and product names are registered
trademarks or service marks of their respective owners.
ResponsiveVoice-NonCommercial licensed under