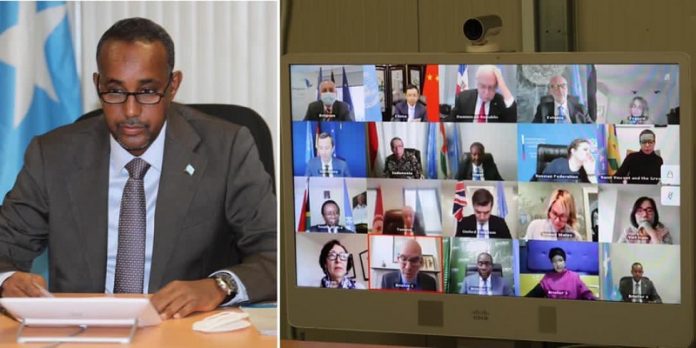 Mogadishu (UNA-OIC) – Somali Prime Minister Mohamed Hussein Roble said preparations are in full swing for the parliamentary and presidential elections, indicating that the committees charged with facilitating the electoral process have begun to perform their tasks well.

The prime minister made the statement during his participation in a virtual meeting of the United Nations Security Council, where he talked about several important issues.

With regard to the political role of women, Roble affirmed his government’s resolve to realize the percentage of parliamentary seats to be held by women, in accordance with the agreed items in the internal regulations of the Federal Parliament of Somalia.

The prime minister addressed the ongoing military efforts in Somalia, saying the National Army has won a series of battles against the remnants of the al-Qaeda-linked al-Shabaab militia. He also briefed the Security Council on the federal government’s efforts to eliminate the coronavirus, stressing that the government has made every effort to confront pandemic.