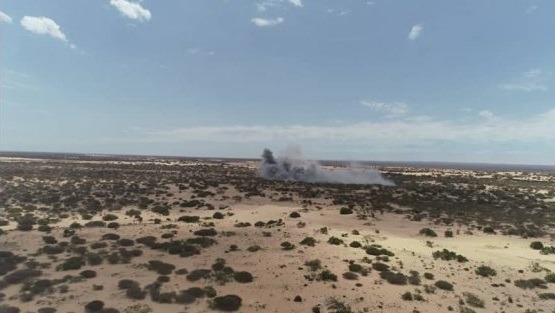 Mogadishu (UNA-OIC) – Somalia’s special forces, Danab, and National Army (SNA) and their partners have once again struck a blow to the heart of al-Shabaab and destroyed a large firing position belonging to the militant group.

Sunday’s airstrikes, conducted between Bacadweyne and Camaara towns near Wisil town in Galmudud State in support of a Danab operation, resulted in zero civilian casualties and served as another major blow to al-Shabaab’s capability to wage war against the Somali people.

The Danab and SNA forces operations limit al-Shabaab’s ability to kill and terrorize the Somali people, Somali National News Agency (SONNA) reported, noting that more al-Shabaab fighters are defecting the terrorist organization that is losing ground against the Somali security forces, who welcome the defectors and treat them with dignity.