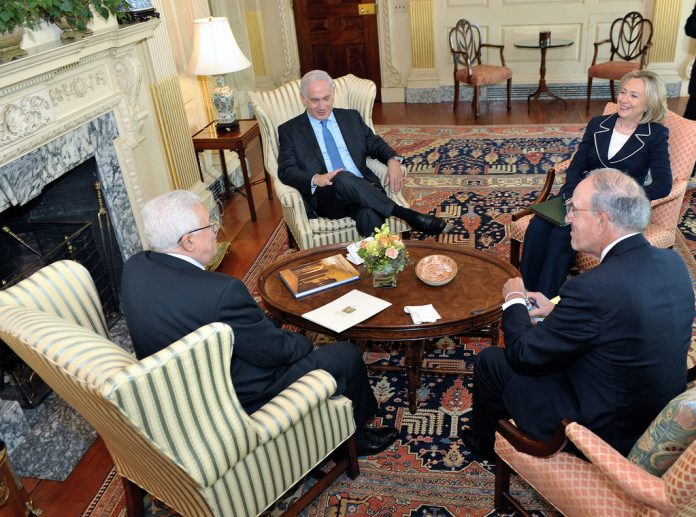 THE CLOSER Mahmoud Abbas gets to the end of his reign, the more extreme his language becomes.

Recently he spoke about Donald Trump and uttered the words “May your house be destroyed”. In Arabic, this is a common curse and sounds less extreme than in English. But even in Arabic, this is not a usual phrase when speaking about a head of state.

This week Abbas spoke about the US ambassador to Israel, David Friedman, and called him a “Son of a Dog”. This, too, sounds in Arabic slightly less offensive than in English, but is hardly diplomatic.

It is hard to say that Friedman does not deserve it, though I would have wished, as a dog-lover, the Abbas had chosen another animal.

Friedman is a kippah-wearing Jew, who identifies completely with the most extreme settlers in the occupied territories. He certainly would be more fitting as Israeli ambassador to the US than as US ambassador to Israel.

That would be problematic, too, because he has called liberal American Jews “worse than Capos” – “Capos” (short for “camp police”) were the prisoners who assisted the Nazis in the concentration camps.

To appoint such a Jewish fascist ambassador to Israel is – well – chutzpah. This could not happen in a normal country, which does not send an ambassador to a country in which he or she has a personal involvement. But Trump does not care. Not for Israel and not for Palestine.

SO WHAT does Trump really care about? He cares about votes in US elections.

Sending a religious Jew to serve as his ambassador in Jerusalem may gain him some votes in the US Jewish community. American Jews generally vote for the Democrats. Why? Out of habit. Generations of new immigrants to the US have voted for the Democratic party – the Irish before the Jews, the Asians after the Jews.

But most American Jews will continue to vote for the Democrats, in spite of the kippah on the head of Friedman. There are voices in the Jewish community which accuse their leaders of neglecting their own concerns, such as rising anti-Semitism, and spending all their energies supporting Israel’s extreme right-wing government.

But Trump has far more important supporters: the millions of evangelists. These peculiar Christian fanatics have a special vision: they believe that Jesus Christ will return once all the Jews congregate in the Holy Land. They do not like to mention what they expect to happen next: the Jews will convert to Christianity, and those who do not will perish.

Sounds strange? It sure is strange. But Trump needs these millions of votes, without which he would not have been elected in the first place. He acts according to the beliefs of this sect.

As a result, the President of the US totally ignores the rights of the Palestinian people and their aspirations. According to him, the Palestinians must accept what is offered to them, as a dog must accept what his master throws to him and wag his tail. What exactly? Trump’s masterful Peace Plan is still wrapped in secrecy. But it is enough to know who is in charge of it: his Jewish son-in-law, Jared Kushner.

So it is natural for Abbas to despair. He knows that during his remaining days in office, nothing good will happen to the Palestinians.

NEVER SINCE the emergence of the modern Palestinian nation has its situation been as dire as it is now.

The inhabitants of Palestine began to feel like a nation at the end of World War I, when the Ottoman Empire broke down. Photos of demonstrations held at the time in Jerusalem show the new Palestinian flag – black, white, green and red. Until then, the Palestinians were generally considered “South Syrians”. But when Syria was turned over to the French and Palestine to the British, this tie was broken.

Since then, the Palestinians have experienced many events: the Zionist influx, the Great Arab Rebellion of 1936, the United Nations partition resolution of 1947, the end of British rule, the war of 1948, the Naqbah (catastrophe), the several wars, the rise and murder of Yasser Arafat, and more. But never was their situation as desperate as now.

True, the heart of all the Arab peoples, and indeed all the Muslim peoples, has remained true to the Palestinians. But there is no Arab – or Muslim – government which is not ready to sell the Palestinian cause for its own interests.

Throughout the world there is a lot of sympathy for the Palestinians, but no government would lift a finger for them. And the most powerful country in the world is now their open enemy.

AS IF all this was not enough, the Palestinians themselves are deeply divided between the PLO in the West Bank and Hamas in the Gaza Strip. This is so much in the interest of the Israeli government that it is difficult not to suspect that it is involved.

Between the Mediterranean Sea and the Jordan River there live now about 13 million people, about half of them Jews and the other half Arabs. The Arabs may have a slight majority, which will grow continuously because of their higher birth rate. That does frighten the Zionist demographers. But they “cut off” the Gaza Strip from the rest of the country, pretending that its 2 million inhabitants do not belong to Palestine. That makes the problem seem a little less frightening.

This is the situation now. There is a tacit agreement in Israel not to “count” the inhabitants of the Strip. They are not there. There is only the West Bank, which must be Judaized.

A DESPERATE situation has one advantage: it encourages the search for new solutions.

That is happening now on the Palestinian side. Without waiting for the stepping down of Abbas and the appointment of a new leader, new ideas are popping up.

Yasser Arafat once explained to me why he entered the path to Oslo. We tried everything, he said. We tried the armed struggle. We tried diplomacy. We tried full-scale wars. Everything failed. So we entered a new road: peace with Israel. (The first sign was Arafat’s inviting me to a meeting in Beirut.)

It is clear now that Oslo has failed. Yitzhak Rabin was murdered. In Israel, the extreme right is in power. It steals the land and puts settlers on it. Israel has a leader who hates the Palestinians, an annexationist from birth.

And here comes a new generation. In a few weeks, a new chapter in the Palestinian story may start.

There have always been voices in the Palestinian community who advocated non-violent struggle. They found no listeners, because in Arab tradition, struggles are generally violent. Mahatma Gandhi, Martin Luther King and Nelson Mandela were not Muslims.

Now the idea of the non-violent struggle is raising its head. Not because of its moral aspect, but because it promises results.

In a few weeks, the Palestinians will start a non-violent campaign. Its declared aim is the return of the refugees. Thousands of Palestinians are about to march to the borders with Israel, first in the Gaza Strip and then in other places. They will not confront the Israeli army, and not break through the fences. Instead, they will put up tent camps on the Palestinian side of the fences and stay there for a long time.

This is a well-tried method. The sleepy Palestinian cause will suddenly return to life. From all over the world, journalists will come and see. The camps will become centers of world attention. Throughout Europe and the world, solidarity camps will spring up. In the Arab countries, the princes and Emirs will find it hard to suppress demonstrations of sympathy.

And what then? Allah is great.

IN MY eyes, this plan has one great defect: the official aim.

If the protest movement concentrated on the aim of Palestinian independence, the world would give its blessing. There is now a world-wide consensus in favour of Palestinian statehood and the end of the Israeli occupation. In Israel, too, this aim has a lot of supporters. “Two States” or one colonial state, independence or occupation – the choice is clear.

The refugee problem is quite different. During the war of 1948, some 650 thousand Palestinians were displaced, either in the turmoil of the fighting or as a deliberate Israeli policy. By now, their families have grown to 6 million.

Some live in the West Bank and the Gaza Strip, some in the countries around Israel and throughout the world. Some have taken root and started a new life, some are still refugees, supported by the international community. All are longing for their ancestral homes.

Bringing them back would mean the end of Israel, the displacement of millions of Israelis. This would be possible only through war. The very idea frightens every Israeli.

Is there no solution? I believe there is. Once, after a very emotional meeting with Palestinian refugees in America, I told my wife: “You know what my impression is? That these people are less interested in an actual return than in moral compensation. They want Israel to confess and apologize.”

When drawing up plans for peace, I proposed (a) to apologize officially, (b) to allow the return of a symbolic number of refugees, (c) to pay compensation to all others.

How many would be allowed to return? A number of 100 thousand has been mentioned. I believe that we can do much better. In a situation of peace and reconciliation, even the addition of half a million to Israel’s present 1.5 million Palestinian citizens would be acceptable.

I discussed this solution with Yasser Arafat. My impression was that he agreed more or less, though he kept the refugee issue as a bargaining chip. Anyhow, this is no longer the main problem on the way of peace.

So why go back 70 years? In a major Palestinian campaign, as planned now, why not concentrate on the main point: an end to the occupation, a State of Palestine next to the State of Israel?

THE NON-VIOLENT struggle is an excellent idea.

It reminds me of a saying of the late Abba Even: “People and states always do the right thing – after all other possibilities have been exhausted.”