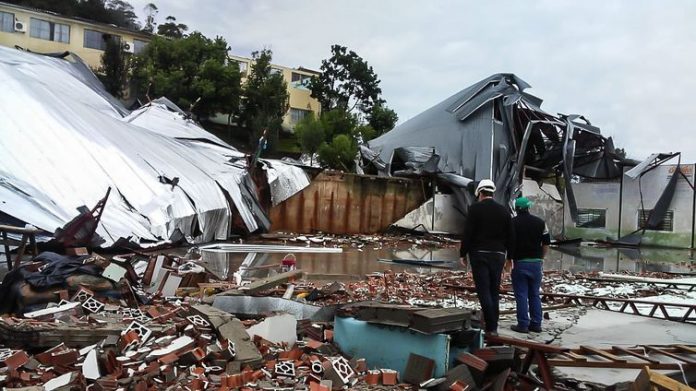 In the South of Brazil, nine people were confirmed to have been killed as a result of an extratropical cyclone that reached the region on Tuesday afternoon (Jun. 30), causing gushes of wind, rain, hail, and a lot of damage.

Over a thousand firefighters are reported to have been answering calls especially in connection with fallen trees and signs. Up to this morning (Jul. 1), the Fire Department had worked to deal with some 1.6 thousand calls.

Electricity authorities in Santa Catarina state declared that snapped cables and other issues interrupted the supply of electric energy to 1.5 million consumer units. In a number of cities, no telephone and internet signal is available.

On his Twitter account last night, Santa Catarina Governor Carlos Moisés pledged that “the government will spare no efforts in helping our people at such a difficult time.”

A possible tenth casualty is under consideration by experts in Rio Grande do Sul. This is a 53-year-old man who fell victim to a landslide while working at a construction site in Nova Prata. Even though it took place early in the evening, when heavy rain was already pouring, the final report is yet to be published before the authorities can ascertain whether the precipitation contributed to soil instability, prompting the landslide.

Also on Twitter, Rio Grande do Sul Eduardo Leite said all civil defense teams have been engaged in efforts to offer support to the people. “The state government has distributed over 3 thousand square meters of tarpaulin and is also working to split fallen trunks and free roads,” Leite declared.

In the state of Paraná, the weather phenomenon affected 3,127 people across 30 cities, damaging 666 houses and forcing at least 81 people to temporarily leave their homes. Electric energy supply to some 1.2 million households and businesses as cut short, according to the local power utility. In East Paraná, 2,562 consumer units still lacked energy.

“The effects we’re dealing with are just the aftermath of the cyclone that affected Santa Catarina most of all,” Sargent Caroline Pompeu, of Paraná’s Civil Defense, told Agência Brasil. According to the state agency, even though the downpour stemming from the extratropical cyclone started to move away, winds may reach 50 to 70 km/h between the state’s south and the east.