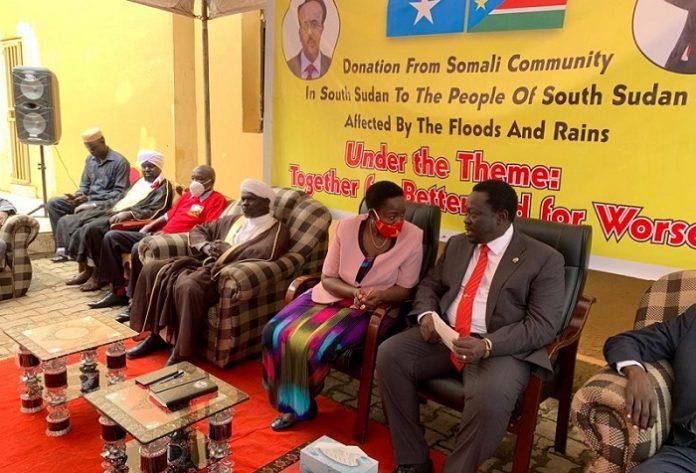 Juba (UNA-OIC) – The General Secretariat of the South Sudan Islamic Council (SSIC) conducted a convoy of relief aid provided by Jonglei State to the displaced in Mangala district due to recent rainfalls and floods.

In a speech on this occasion, South Sudanese Vice President Hussein Abdelbagi Akol expressed pride in the SSIC’s efforts and its initiative that confirms the effectiveness of the Muslim community in their social surroundings. He called on Islamic and charitable organizations and philanthropists to offer a helping hand to their brothers who are affected by flooding and other disasters.

The vice president also appreciated the efforts of the Somali community in South Sudan State for their response to all calls for relief and cooperation with their brothers in their second home, South Sudan.

For her part, Minister of Parliamentary Affairs Jemma Nunu Kumba, who is also the secretary-general of the ruling party, expressed her deep happiness at the SSIC’s initiative, which comes in response to the call for help launched by the General Secretariat of the ruling party, to save the lives of those affected by the floods. She underscored that this support and the spirit of solidarity is a true translation of the meanings of the teachings of the Holy Qur’an.

In turn, Information Minister Michael McCoy Loith, who is also the head of the Greater Bor Community, praised the SSIC’s initiative and its cooperation with a number of institutions, in order to conduct a relief convoy for the Bor community, who were affected by the floods.

For his part, the Ambassador of Somalia to South Sudan, Hussein Haji Ahmed, affirmed that his country support for the South Sudanese government and people in all circumstances and occasions. He also commended the distinguished relations between the two countries.

SSIC Secretary General Sheikh Abdullah Burj said the great campaign to assist those affected by the floods comes as a sense of the Islamic Council for its societal role and a sincere desire to contribute to reviving the virtue of cooperation and solidarity as well as providing relief to the needy.