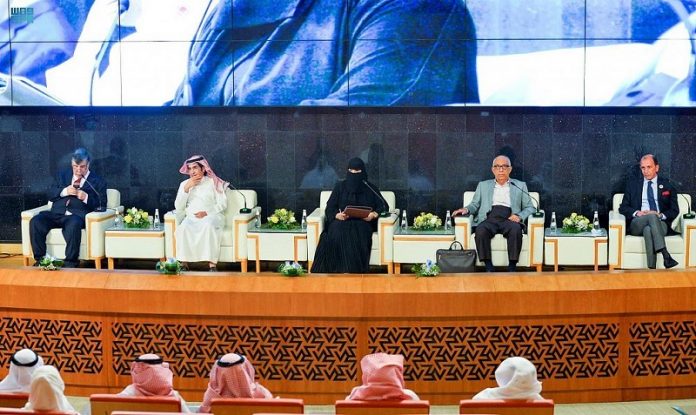 Riyadh (UNA-OIC) – Iraqi and Saudi intellectuals reviewed the achievements of Iraq’s renowned poet Badr Shakir Al-Sayyab, as well as his pioneering role in the renewal movement in contemporary Arabic literature and his experience through which he was able to continue the development of the Arabic poem.

The symposium was hosted by the Saudi Press Agency (SPA) on the sidelines of Riyadh International Book Fair 2021 at the monthly SPA forum and moderated by Saudi Writer Dr. Hessa Zaid Al-Mufrah.

The participants discussed what modern Arabic literature has gained from Al-Sayyab during his study years in Baghdad, his extensive studies of English literature, and how he was impacted by the American Literature the world intellectual heritage, and employing this impact in service of the Arab poetry.

The audience also discussed the suffering of Al-Sayyab and his emotional failure, intellectual persecution, and struggle against poverty and ignorance and how he managed to rid of the monotonous musical unit, as his poems were not linked to that specificity making them more diversified and overwhelmed with melodious rhythm as per his psychological state.

The audience delved into discussions over the impact of Al-Sayyab’s poetry on Arabic literature, according to different trends in literary criticism, which enriched the symposium and the historical aspect of his poetry.

At the end of the session, SPA President Dr. Fahad bin Hassan Al Aqran honored the speakers, praising the diversity of programs and diverse cultural events included in the Riyadh International Book Fair.