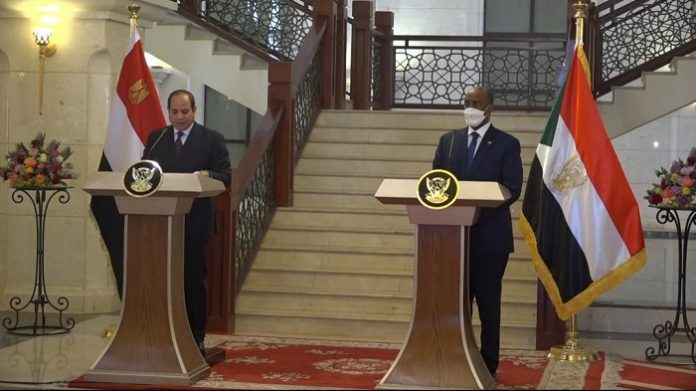 The statement was made at the end of their talks on Saturday in Khartoum, where they stressed that the file of the Nile waters of vital interests to Sudan and Egypt, as they are the two downstream countries of the Nile Basin and they will be directly affected by the mega-dam project.

In a press statement after the talks between the Sudanese and Egyptian sides, President Sisi said the meeting discussed the developments on the GERD’s file, outlining that Sudan and Egypt have agreed on the importance of continuing close coordination and consultation in this regard.

He also emphasized the necessity of a return to serious and effective negotiations with the aim of reaching a fair, balanced and legally binding agreement as soon as possible, prior to the next flood season and the filling of the dam, and in a manner that realizes the interests of the three countries and strengthens the bonds of cooperation and integration among them and their peoples.

In reference to Ethiopia’s intention to carry out the second filling of the dam even without reaching an agreement, Sisi said that the Egyptian and Sudanese parties share identical views on the rejection of any approach to impose a fait accompli and to extend control over the Blue Nile through unilateral measures that do not take into account the interests and rights of the two downstream countries.

The Egyptian president noted that this unilateral measure would cause severe damage to the interests of Sudan and Egypt. Therefore, he said, the Sudanese and Egyptian sides discussed the track of negotiations through the formation of an international quartet committee including the African Union, the United States, the European Union and the United Nations to mediate in the negotiation process, as proposed by Sudan and supported by Egypt.

He said that Sudan and Egypt have affirmed their full confidence in the efforts of the President of the Democratic Republic of the Congo to enhance the opportunities of negotiation success and to achieve the breakthrough required for reaching the desired agreement.

For his part, TSC Chairman Al-Burhan announced that Sudan and Egypt have reached unified visions to serve that serve progress and development of the two peoples and contribute to the stability of the two countries. He said the Egyptian president’s visit constitutes real support to Sudan and the revolution of the Sudanese people.

“President Sisi’s visit comes at a time when Sudan is passing through a transitional period of many difficulties that necessitate unifying efforts and support of friends and brothers,” Al-Burhan noted, adding that they discussed all the issues that are likely to support the cooperation between the two countries.