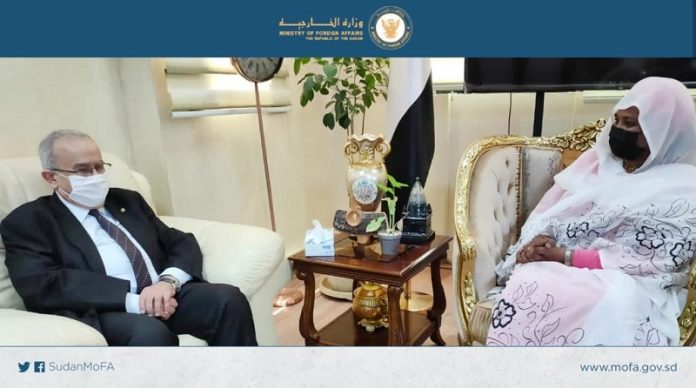 This came as Ms. Al-Mahdi received Lamamra on Saturday in Khartoum, where she briefed him on the development of the GERD issue, indicating that Sudan is seeking to reach a diplomatic solution to the dam crisis.

She also stressed her country’s firm position on the need for a binding legal agreement on the filling and operation of the dam, expressing the hope that Ethiopia would listen to reason and deal responsibly and willingly with the Sudanese situation.

Regarding Libya, the Sudanese foreign minister affirmed the necessity of coordinating efforts to help the Libyan parties reach an agreement and achieve a solution that leads to peace and stability in the country. She noted that Sudan would spare no effort in supporting the achievement of security and stability in Libya and containing the conflict and its spillover effects on the neighboring countries and the entire region.

For his part, Algerian Foreign Minister Lamamra reiterated the firmness of the relations between the two countries and the joint coordination in regional and international issues. He pointed out that Algeria seeks to address the GERD crisis through the positive engagement of the parties concerned to open prospects for negotiation with the required will and confidence among them.

Meanwhile, the top Algerian diplomat appreciated the role played by Sudan with the neighboring countries to help Libyan parties reach an agreement leading to stability in their country.

Lamamra extended an invitation to Ms. Al-Mahdi to visit Algeria to boost the cooperation and coordination between Khartoum and Algiers.