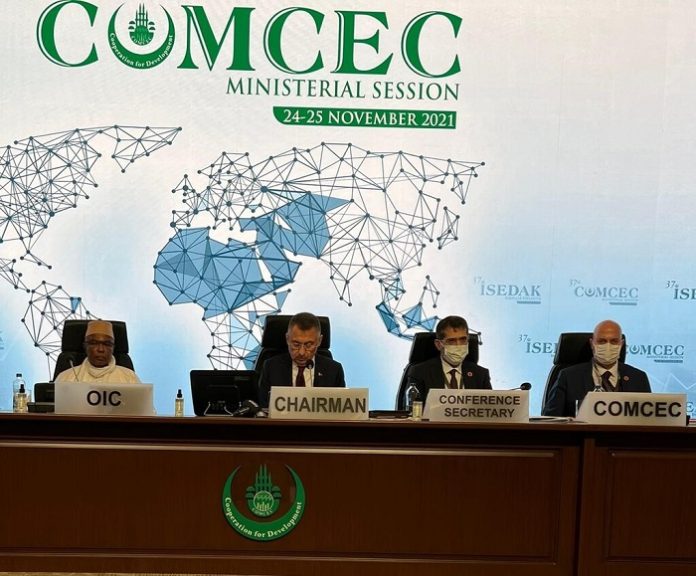 Istanbul (UNA-OIC) – Turkish President Recep Tayyip Erdogan inaugurated in Istanbul on Wednesday the 37th Session of the OIC Standing Committee for Economic and Commercial Cooperation (COMCEC), in the presence of OIC Secretary-General Hissein Brahim Taha and the concerned ministers from the member states.

In his statement, President Erdogan congratulated the new OIC Secretary-General on assuming his office as of 17 November 2021 and pledged Turkey’s support for him and for the activities of the Organization to implement its programs and projects for the benefit of the Muslim Ummah and humanity at large.

Speaking at the opening ceremony of this COMCEC meeting, Secretary-General Hissein Taha acknowledged the constant support of President Erdogan, the Chair of COMCEC, which facilitated the realization of various programs and projects of the COMCEC and the OIC in general.

The Secretary-General called on all OIC member states to support the farmers and population in the rural areas to achieve food security and promote export-oriented agricultural products, and reduce unsustainable rural-to-urban migration in OIC countries. He also called for greater cooperation and coordination among the member states.

The 37th COMCEC Session was attended by ministers in charge of the trade and economy of OIC Member States, in addition to OIC institutions and international organizations.

The opening ceremony was also addressed by President of the Islamic Development Bank Group (IsDB) Dr. Muhammad Al Jasser, who among other issues, spelled out the current programs of IsDB on mitigating the effects of the COVID-19 pandemic.

The event reviewed the status of implementation of various projects under COMCEC in the area of trade and investment, agriculture, tourism and financial development, private sector and poverty alleviation, among others.

COMCEC is an OIC Standing Committee for Economic and Commercial Cooperation, which meets annually to review OIC activities in the area of economic and trade development.