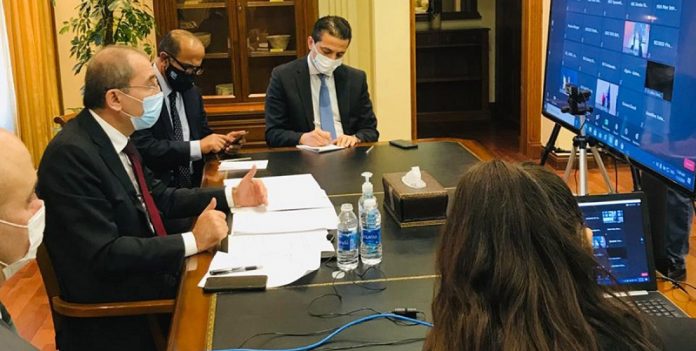 Amman (UNA-OIC) – Jordanian Deputy Premier and Minister of Foreign Affairs and Expatriates Ayman Safadi said on Tuesday that terrorism is a common enemy that is not linked with any civilization or religion, and certainly has nothing to do with the Islamic faith and the values of peace, love and respect for others it holds.

Safadi stressed in remarks at the 2020 Organization for Security and Co-operation in Europe (OSCE) Mediterranean Conference that defeating terrorism cannot be realized only by military and security means, but through exposing its ideology, fending off the culture of hate that feeds it, and reinforcing the culture of respect for others and shared values.

Defeating terrorism and its ideology also calls for changing the environments of despair, injustice, ignorance, occupation and lack of opportunity on which it thrives, he stressed.

The foreign minister expressed Jordan’s condolences for the victims of the terrorist attack which occurred in Vienna on Monday, and wished the injured recovery, reiterating the Kingdom’s condemnation “of this crime and all forms of terrorism.”

Safadi also told the virtual meeting that Jordan remains committed to working with the international community to combat terrorism and the culture of hate, noting that the Kingdom took the lead in initiatives that promote inter-faith dialogue and the culture of harmony and respect for the others.

He emphasized the importance of cooperation in facing common challenges and enhancing security through a holistic approach that includes strengthening governance, equality and women’s participation and generating hope and opportunity, lifting injustice, occupation and oppression.

The minister also stressed the need for solidarity in facing the COVID-19 pandemic and enhancing joint action as the most effective way to deal with its repercussions.

He highlighted the important role the OCSE and the Mediterranean Group emanating from it in promoting joint action to achieve comprehensive security.

Tuesday’s meeting was attended by the foreign ministers of Sweden, Spain, Morocco, Greece, Finland, Cyprus, Malta as well as representatives of member states.