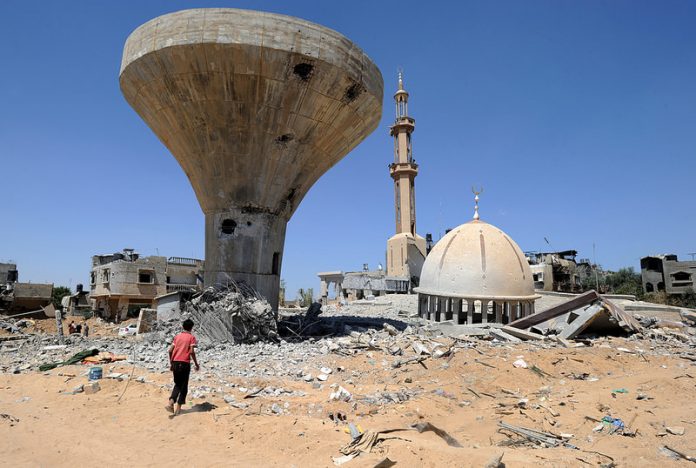 One evening, almost two decades ago, I was on CNN’s “Crossfire” sitting opposite a Democratic Congressman (who is no longer in office, having repeatedly disgraced himself in “sexting” scandals). We were there to debate Israel’s botched assassination of a Hamas leader in Gaza. They did kill him, but in their “precision bombing” of a densely crowded area, Israel also killed a dozen others – whose only crime was to be both Palestinian and in the wrong place, at the wrong time.

When asked what he thought about the Israeli attack, the Congressman began by saying that it was regrettable, but then added that “sometimes we have to do things like this.” I know it was off-topic, but I couldn’t resist asking him what he meant by “we?” I reminded him that he was a US Congressman, not a spokesperson for the Israeli government.

Back on topic, I made two points, one related to “precision bombings” and the other to the stupidity and immorality of the entire cycle of violence.

Because we were on stage before a live audience, I pointed to an individual in the middle of the theater and observed that if I targeted that person with the kind of massive bomb Israel had used in the attack, everyone around that person would also die. Since Israel did this repeatedly, such acts of a murder couldn’t be dismissed as “accidental” or sloughed off as mere “collateral damage.” When you know what will happen and you do it anyway – it’s murder, plain and simple.

In that sense, what the Israeli Air Force did was no different than what the terrorist does. Both kill innocent bystanders who happen to be in the wrong place, at the wrong time. And both use lethal force with the mistaken belief that they’re “teaching the enemy a lesson,” which is the classical definition of terrorism – the use of force against innocents to create fear in order to advance a political agenda.

I went on to say that I wished I could have been a fly on the wall when the Hamas leader sent his young charges out on their deadly mission or when the Israeli officer ordered his pilots to theirs’. Did Hamas really believe that the suicide bomber would hasten the end of the occupation? And did the Israeli commander believe that the killings he was ordering would hasten the end of the resistance to the occupation? After decades of an insane cycle of violence, could they have been that ignorant of reality?

I recall this debate because two decades later, we are witnessing the same deadly stupidity still playing out in the Israeli-Palestinian conflict. Israel still apparently believes that because they possess overwhelming power, they can wield it with impunity and achieve their desired result – to squash the resistance to their occupation. Their murder of an Islamic Jihad leader, illegal by any standard of international law, only served to bring a hail of retaliatory rocket fire from Gaza. As could be expected, Israel then responded with massive bombardments of Gaza, killing dozens, including a Palestinian family with a number of little children blown to bits.

If history provides any lesson, this will not be the end of it. Islamic Jihad is, no doubt, plotting its revenge and the cycle will continue. But, and it’s necessary to ask, “To what end?” Revenge or anger born of desperation isn’t a political strategy and it won’t end oppressive Israeli rule, any more than Israel’s disproportionate use of violence will force the Palestinians to acquiesce to their brutal policies.

What’s equally disheartening is the American and Arab reactions to this Israeli and Palestinian “dance until death.” In response to the tragedy that played out this week, the US press and political leadership immediately responded with familiar expressions of support for “Israel’s right to defend itself” – ignoring the reality that this round of violence, like so many others, began with an Israeli assassination and ultimately involved bombings that took the lives of Palestinian innocents. This is not self-defense. It’s terrorism and murder.

Equally distressing were the comments from some in the Arab media who continue to refer to Islamic Jihad and Hamas as “the resistance.” The suicide bombings of old weren’t resistance – they were terrorism and murder. Today’s rockets blindly fired across the border also can’t be classified as resistance. The only purpose they serve is to cause fear among civilians and provide Israel with the opportunity for a lethal response – in that sense, these rockets are also suicidal and weapons of terror.

Here I recall the lesson taught by the late Tawfiq Zayyed, the Palestinian mayor of Nazareth and Member of the Israeli Knesset. He was in the midst of a US speaking tour when he was challenged by a young man in the audience who criticized Tawfiq’s condemnation of terror tactics used by some Palestinian groups. The man said, “You have denied our right to armed struggle, a right recognized by the United Nations.” Tawfiq responded, “You do have the right to armed struggle, but when you use it as badly as you have and in the way you have used it, you forfeit that right.” He went on to counsel them to find a better and more effective way to resist.

Both the Israelis and some Palestinian groups, and their supporters – can seek to justify or even glorify the stupidity – but cold hard reality tells us otherwise. It’s not “self-defense” to murder people from the air. And it’s not “resistance” to blindly hurl useless missiles across the border, especially when, because of the immorality of your enemy, it only provokes them to bring more death and destruction to your own people.

After decades of this, it’s time for a new vision and new strategy of real mass resistance to challenge and end oppressive Israeli rule and end the cycle of violence.

BDS is one component of such a new strategy, as is the move toward Gandhian “self-reliance” that is working to wean Palestinians away from the Israeli economy. The March to Return had great promise but didn’t deliver for several reasons: Israel’s unconscionable violent response to the marchers was met with a change in Palestinian tactics, and the division within the Palestinian polity meant that the March wasn’t joined by the Palestinians in the West Bank and those in exile.

I recall the vision of the late Abdul Jawad Saleh, the legendary mayor of el Bireh who, after Israel cruelly deported him, sought to organize a massive march from exile – with tens of thousands of Palestinian refugees from Lebanon and Jordan storming the borders saying, “Let my people in.” When his plan was criticized by those who said, “But they’ll shoot us,” he said, “They’re shooting at us anyway, but if we maintain our discipline and have all of our people united, we can provoke the conscience of the world.” He was right then. And he’s still right now.

Imagine for a moment, if the Gaza Marches had been joined by tens of thousands of Palestinians marching toward Jerusalem saying “Let our people in.” And thousands more marching to both sides of the Wall and closing roads and checkpoints; and Palestinians in Jordan and Lebanon marching peacefully to the borders. If they sustained this and maintained a peaceful discipline, it would, I believe, hasten the end of Israel’s oppressive rule.

For this, or any new visionary strategy, to happen, all of the Palestinian factions will have to come to their senses and realize that what they’ve been doing is a dead end – with emphasis on both words “dead” and “end.” Until they do, the tragic and pointless cycle of violence will continue – including the foundational violence inherent in Israel’s brutal occupation.