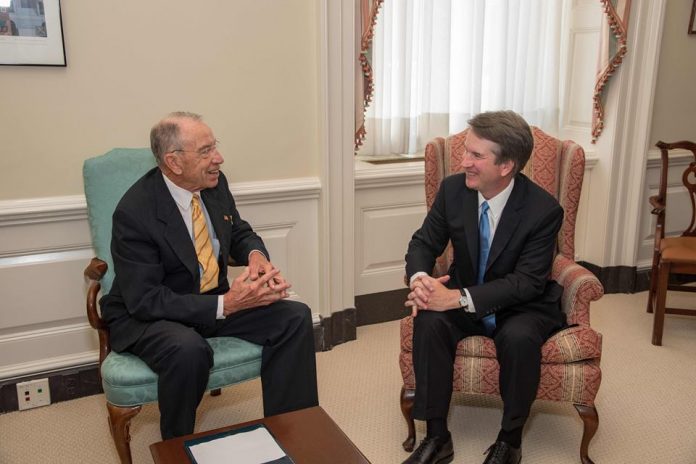 President Donald Trump’s nomination of Brett Kavanaugh to the Supreme Court exacerbated our nation’s deep partisan divide. It has also profoundly affected my neighborhood and my church.

My family has lived in Northwest Washington, DC for almost four decades. During all this time, we have gone to the Catholic church that’s a few blocks from our home. My five children attended the neighborhood Catholic school, where for 17 years, I coached basketball. After graduating, all five went to three different local Catholic high schools.

With this much in common, you might think that my neighborhood, my church, and I would be overjoyed that “one of ours” will be an Associate Justice of the Supreme Court. To the contrary, I am distraught and my church and neighborhood are deeply divided.

Despite being an upper-middle-class white community, my neighborhood is largely liberal and votes Democratic (Hillary Clinton won an overwhelming majority in this area). There are, of course, some prominent Republicans and conservative political figures who live in the area and who go to our church, but they are a distinct minority.

When Kavanaugh was first nominated, the local reaction was mixed. There were those who rushed to support him out of loyalty because he had long been a part of their circle of friends, or because they were simply overcome by the prospect of one of their neighbors being on the highest court in the US. Others did so because their daughters were on one of the teams he coached and they knew him to be a “nice man.”

There were, of course, some, not many, who looked forward to seeing Kavanaugh on the court because they agreed with his philosophy. On the range of issues, both social and political, expected to come before the court, most of my neighbors are on the opposing side of Kavanaugh and the president who appointed him.

The Supreme Court Justice that Kavanaugh is replacing, though not a liberal, on a number of occasions, provided a balancing vote that kept the court somewhat centered. Kavanaugh, on the other hand, is a partisan Republican. He was part of the team that worked to impeach President Bill Clinton. He served as a close aide to President George W. Bush and had been hand-picked for this appointment by the hardline conservative Federalist Society.

We fully expected that the debate over his nomination would focus on partisan divide over issues like: health care reform, women’s rights, voting rights, and environmental protection. But by the time Kavanaugh’s confirmation hearings before the Senate Judiciary Committee were to begin another set of concerns came to the fore. The Democrats on the committee had asked to review all of the nominee’s official communication during his time in the Bush White House. In response, the Trump Administration and the Republican leadership of the Senate refused to release 90% of this material. Nevertheless, from the emails and other correspondence that was made available, it became clear that Kavanaugh had lied under oath during an earlier Senate hearing. From the record, it appeared that he lied about his involvement and awareness of: Republican theft of Senate Democratic staff emails, NSA warrantless wiretaps, and the treatment of prisoners in Guantanamo. These matters were of concern to the Democrats, as were the missing 90% of his correspondence. They asked, “what else is he trying to hide and should someone who has lied under oath sit on the Supreme Court?”

This was where the matter stood until the public disclosure of allegations by a Dr. Christine Blasey Ford, who in a sworn affidavit stated that while in high school she had been sexually assaulted by a drunken Kavanaugh. What followed were more allegations of excessive drinking and other instances of degrading or sexually aggressive behavior toward women while he was in college and law school.

These new charges exposed two related and deeply felt grievances that virtually exploded into the public consciousness, both of which also played out in my neighborhood.

Much has already been written about the pain of survivors of sexual assault who were prompted to come forward after Dr. Ford told her story. Many women, whether or not they had been direct victims of assault, were profoundly affected by and could relate to her pain and her vulnerability. Dr. Ford’s courage in revealing her long-suppressed story empowered them to tell their stories, and then the way Ford was treated by the Republicans and demeaned by Trump was like putting salt on their open wounds, stoking justifiable outrage.

All of this anger also resonated in Northwest Washington. But there was another more subtle yet still deeply unsettling dimension to this drama that played out here. Thousands of young men and women who had graduated either from the all-male high school attended by Kavanaugh or one of its nearby sister schools were forced to relive their teenage years, and what they remembered wasn’t pretty. It was as if, in one instance, decades had been erased and they were back in high school recalling their experiences of having to deal with a small privileged group of athlete stars and/or those who belonged to the elite clubs, who had too much money, too little self-restraint, and operated with a sense of impunity. While a few hundred or so graduates from these schools had signed letters in support of Kavanaugh, thousands more signed letters supporting Dr. Ford and noting that the type of behavior she described had been all too common and was sad, therefore, all too believable.

Kavanaugh aggravated the situation by bringing 14 little girls from his basketball team in their grade school uniforms to sit in the front at his hearing—presumably to bear silent witness that he was, in fact, “a good man.” Additionally, a few tone-deaf Catholic clergies (including one of our former pastors) decided to give interviews vouching for the nominee’s good character. And when Kavanaugh was confirmed, his Catholic high school sent out a release praising him for living out the school’s motto of living “a life for others.” All of these combined to bring home the hurt and the division created by the Kavanaugh nomination. Unlike the political issues that were at stake in his confirmation, the feelings that all of this evoked were visceral.

As a neighborhood friend noted “it’s not as if our church doesn’t have enough on its hands dealing with the clergy sex abuse crisis. Why are some so blind that they can’t see the damage they are doing and understand that they are only making the crisis worse?”

As of today, Brett Kavanaugh has been sworn in as an Associate Justice of the Supreme Court. That part is over. What’s not over is the pain and the mistrust that is tearing apart America, and my neighborhood and my church, as well.