Induction of Quota System in 1973 dividing Sindh as Sindh Rural and Sindh Urban, favoritism and injustices in jobs and admissions in higher educational and professional institutes, political recruitments in police, courts, administration and other Government machinery and an un-official ban of Muhajirs in higher jobs by PPP Governments as a political revenge have created an incompetent and failed administration of Sindh Province in the 40 years or so. Today, almost every top position in all Sindh Government’s department has been occupied by the workers and followers of Pakistan People Party (PPP) and on the will of PPP’s political leaders, parliamentarians and vaderas (landlords).

Today, the common people Sindh – in Sindh Rural and Sind Urban – are suffering from a lack of quality education, health facilities, safe, secure and clean environment. Citizens are dying every day in Thar due to lack of water, food and medical treatment.

After the fall of East Pakistan, in remaining Pakistan whenever political governments came into power and formed a so-called democratic government, Pakistan People Party (PPP) has ruled the province of Sindh. The Quota System was introduced in 1973 by then PPP’s government of Zulfiqar Bhutto divided the province of Sindh into Sindh Rural and Sindh Urban on the name providing more government and administrative jobs and admissions in higher education and professional institutes to the people of Sindh Rural. The Sindh Urban was constituted on Karachi, Hyderabad and Sukkur and the rest was constituted as Sindh Rural. Through this, division Sindh was used as a tool to buy the votes from Sindhi Speaking on the name of Sindhi Quom (Nation).

Article 27 of the 1973 constitution says, ‘no citizens otherwise qualified in the service of Pakistan shall be discriminated against in respect of race, religion, caste, sex, residence or place of birth‘. In the same article conflicting amendment was done to introduce Quota in Federal and Local government jobs, Sindh was divided into jobs based on Sindh Rural and Sindh Urban which was not done in other provinces. Only 3 cities Karachi, Hyderabad and Sukkur were declared as part of Sindh Urban. More than 60 percent population in these 3 cities were Muhajirs, therefore, the only people targeted were the more educated and qualified Muhajirs. Further cruelty was that Sindh Government has introduced the same quota system in higher educational and professional institutes and in all the jobs in Sindh Government. The quota system was declared un-Islamic by Federal Shariat Court (FSC) but no action was taken by any government. The jobs in police, courts, education, hospitals, and other departments un-officially banned on Muhajirs. Today, one can hardly find any Muhajir on any top job in the Sindh Government. Even in Sindh Rural the jobs and admission in higher educational institutes are given on political basis. Today, most of the top officials in Sindh government are the workers and supporters of PPP. The PPP Sindh is provenly a racist party as they have never selected any Muhajir as a Chief Minister, top Minister or top bureaucrat, it has to be a Sindhi speaking whom they consider the only Sindhis in Sindh.

Originally, in 1973, the Quota System was fixed for a period of 10 years but the governments in the 1980s, and in 1990s enhanced it to 40 years which was expired in 2012, then in August 2013, the cabinet, chaired by then Prime Minister Nawaz Sharif gave its approval to the constitutional amendment in the first provision of Article 27(1) and extended for the next 20 years. The so-called voice of Muhajirs, Motehida Quomi Movement (MQM) did not show any real resistance to the extension and it was passed from the national assembly to remain intact until 2033. The allocation of this unjust Quota System is as follows:

Presumably, Quota System was introduced in order to allocate proportionally the government jobs but in Sindh, it was used by PPP to serve their political interest. Fewer positions (in the quota) was given to urban areas and more positions given to rural areas in all government jobs and higher professional colleges and universities.

Over 60 percent budget of Sindh Government is allocated to Sindh Rural yet no any development or better facilities can be seen in the cities, towns and villages of Sindh Rural, these areas are still backward with the lack of basic facilities to the common citizens, and the simple reason is that these funds are used by PPP ministers, parliamentarians and political affiliates for their own interest and making their own assets in foreign countries through corruption and illegal means.

Every year billions of Rupees are allocated on education, health, and infrastructure where over 60 percent to the Sind Rural, yet forget about development, the government failed to maintain acceptable standard in education, health, and infrastructure in cities, towns and villages. This year of FY2018-19 Sindh government has outlaid Rs.1.44 trillion with Rs 20.45 billion deficit. Now where this deficit will come from. The PPP government, since they are in power in Sindh, has drowned the state in billions of dollars debts.

Both PPP in Sindh Rural and MQM in Sindh Urban have used Sindhis and Muhajirs as their political agenda and achieved their own party agendas. Particularly, PPP who has been in power most of the time has done nothing to elevate the lives of the common people. Corruption and criminalities are part of a culture in Sindh now. Might is Right, who has a power does whatever he/she wants right or wrong. Police have totally been politicized and criminals are serving in top positions in police, courts are not delivering justice on time, doctors, engineering and other graduates coming from a failed education system are incompetent and got jobs on political affiliations.

The rulers of Sindh have created a mess in the 40 years in Sindh. The Federal powers and national political parties have shown no interest to abolish the discriminative quota system. The 2 top political parties Pakistan Peoples Party (PPP) and Muttahida Quomi Movement (MQM) in Sindh have divided the people of Sindh on the name ethnicity and delivered nothing for their benefits. Unfortunately, the MQM so-called the only representative of Muhajirs have provenly failed to address and resolve the issues of Muhajirs.

The majority of the population of Sindh are living below the poverty line. It may be Ruler Sindh or Urban Sindh people have no satisfactory facilities for their basic needs. The level of education, health, jobs, businesses are at its lowest level. Children are dying every single day in Thar for lack of water, food and health facilities. Without going in the details of all these issues as everything on surface now and known to all stakeholders of Pakistan know very well therefore if the sincere powers of the state of Pakistan have to maintain the integrity of Pakistan then Pakistan will have to run on the prime principle of ideology of Pakistan that is equal rights for every citizen of Pakistan with any discrimination of land, religion, culture or language. Especially the discrimination against Muhajirs by Sindh rulers must stop now.

Therefore, Sindh of today cannot be run with its present size of a population and its needs. The division made in 1973 (Rural and Urban) cannot be continued particularly by this incompetent and corrupt government.

While proposed provinces in Punjab are in debate and an amendment bill has been lodged recently in federal parliament to create Bahawalpur and South Punjab as new provinces in Punjab. This is now time to put the agenda on the table and deal the matters with courage and sincerity for the people of Sindh indiscriminately.

In this critical time and before it gets too late as the anti-Pakistan elements consciously backing people like Altaf Hussain to demand a separate state, the federal power of Pakistan must force the government in power to restructure Sindh. The only solution for the betterment of all the citizens of Sindh indiscriminately is the administrative divisions of Sindh by creating more provinces through merging existing divisions. Currently, Sindh is divided into 6 divisions and many districts within each division as shown in the table below.

These 6 divisions should be merged into 3 provinces: 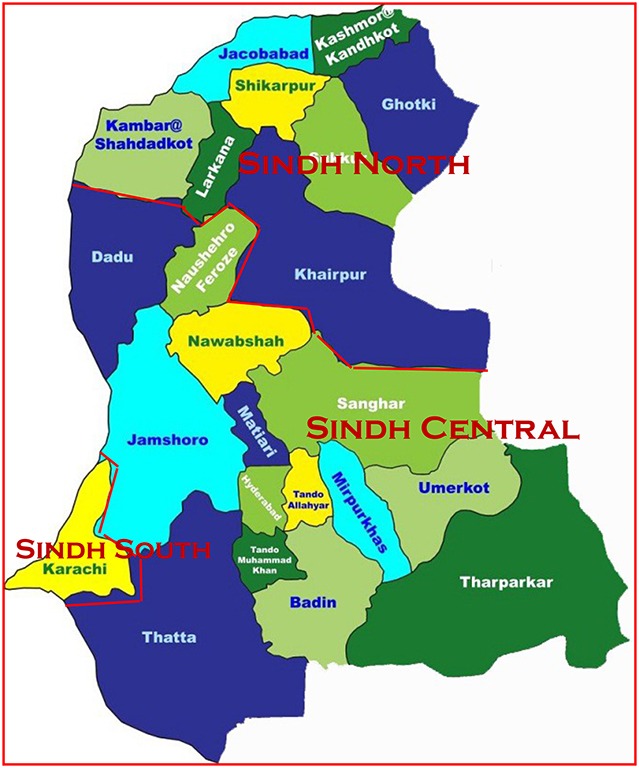 Each Province – Sindh North, Sindh Central and Sindh South – should be declared as an additional standard province of Pakistan with other existing provinces and should receive the equal share of province according to the constitution of Pakistan.

The so-called sympathizers and patriotic of Sindh who opposes the creation of more provinces in Sindh are basically the enemies of the people of Sindh. This fraud and corrupt mafia on the name of politics want to keep control of state power and its resources and people so that they can continue to achieve their own interest and making their own assets. Therefore, now people of Sindh don’t matter what their background will have to stand up and raise their voice for the 3 provinces of Sindh.