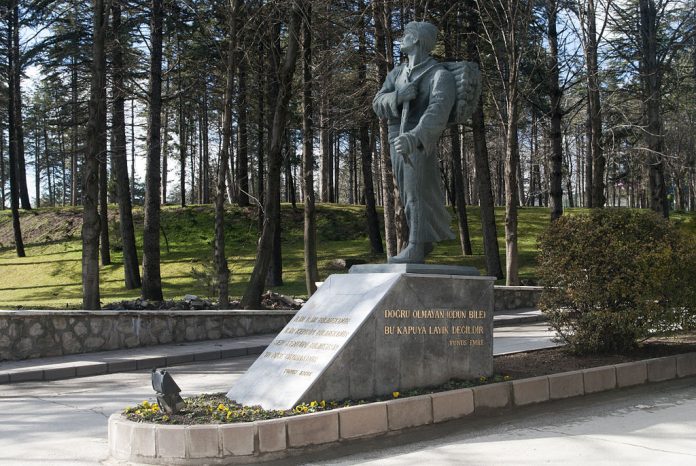 No place seems immune these days from instability, violence and insecurity. The worst victims are Muslims – attacked both from within and without the community. The extremists on both sides are hijacking the narratives about Islam, thus, bringing in much suffering to the people and creating a world of disorder.

I see a close resemblance to the time of Yunus Emre. I, thus, feel very strongly that we need to take time out and reflect, and what a great way of doing such by reading the poems and adhering to the teachings of Yunus Emre!

Yunus Emre (ca. 1240 – ca. 1321 C.E.) is one of the greatest Turkish poets. His collection of poems, called the Divan, was compiled after his death and sheds some light on his life.

The love people have for his liberating poetry is reflected in the fact that many villages claim to be his birthplace, and many others claim to hold his tomb. It is believed that he lived in the Karaman area of Anatolia.

Among the Sufi orders of Anatolia, the Mevlevis and Bektasis were known for their tolerance and inclusiveness. It is this sentiment that Yunus Emre expresses in the line “we love the created beings because of the Creator” (Yunus Emre in Golpinarli, p. 56; trans. Z. Baskal). These Sufis facilitated interaction between different religious, ethnic, and linguistic groups.

Popular legend assigns Yunus Emre to the Bektashi order of dervishes, which was established in the thirteenth century (a few years before his birth), under the leadership of Haci Bektaş Veli (1201-1271 C.E.).

According to a frequently repeated legend, one year when the harvest in his village was scant, Yunus Emre approached a local dervish lodge of Haci Bektas Veli to solicit food for his starving villagers. On his way to the lodge, Yunus decided he could not arrive there with empty hands, and he picked some wild pears on the Anatolian steppes as a gift for Haci Bektas. When Yunus Emre begged for wheat, Haci Bektaş offered him nefes (blessings) instead. Since Yunus’s mind was on his villagers who were starving, he refused the offer. Then Haci Bektas increased his offer, “We will give you ten nefes for each wild pear you brought us.” Since Yunus had never heard of a nefes before, nor could he even imagine its extraordinary bliss, he refused the offering. When he had refused the offering the third time Haci Bektas gave him the wheat he had asked of.  On the way home, realizing his mistake, Yunus turned around and headed back to the dervish lodge for the blessing. But he had missed his chance, said Haci Bektaş, who referred Yunus to Taptuk Emre (a disciple of Haci Bektas). Thus began 40 years of spiritual instruction with this teacher, during which Yunus Emre began to compose Sufi mystical poetry.

One day, Yunus asked Taptuk for permission to leave, “I understand it is not easy to be a dervish; so let me go into the world with my solitude, my otherness, I will become an intimate friend of those who sorrow.”

Yunus traveled on foot, miles and miles through the steppes of Anatolia. One day while he wandered the steppes of Anatolia, he encountered two traveling dervishes who invited him to accompany them. At the dusk of the first day, one of the dervishes prayed to Allah asking for food to eat: no sooner had he finished his prayer than a well-prepared dinner appeared. Yunus was amazed. On the second day at dinner time, the other dervish prayed and a meal just as good as the first one appeared. Yunus began to worry he might in his turn be asked to produce a meal, and indeed, on the following day the two dervishes asked Yunus for his prayer to beg Allah for food. Yunus prayed silently, “O my God, I do not know such prayers, but I ask in the same name that my friends used in their prayer to You, please, don’t embarrass me.”

As soon as Yunus had finished his prayer, twice the amount of food they had eaten on the previous days appeared. The two dervishes were very surprised and asked Yunus, “In whose name did you pray to Allah?”

Yunus replied, “First, tell me in whose name you prayed.” They answered they had prayed in the name of a dervish called Yunus from Taptuk Emre’s dargah.

After that, Yunus returned to Taptuk who gave him this explanation, “We would have delivered you to Haqq, to Allah, as a sealed chest, but you hurried away and opened your mouth. From this day on, you will be the intimate friend of the gharibs, the strangers, the hidden beings, and those who sorrow. This is your path, go, do your duty!” [Note: The Arabic word Haqq (short for Al-Haqq) means the Truth and is one of the 99 names of Allah.]

Yunus traveled every square inch of the steppes of Anatolia on foot by day and by night and taught among the rural poor. His poetry expresses a deep personal devotion to Islam, mysticism, humanity and love for Allah, His Last Prophet Muhammad (S) and mankind. His poetry shows that there are three degrees of Islam — belief (Iman), application or rules (Islam), and doing the good or beautiful (Ihsan). He uses the word Sufi or dervish for someone who has already achieved the first two degrees and is searching for the third, living the beautiful, in mind, body and soul.

Contrasting earthly time with cosmic time, his poetry summons readers to prepare for inevitable death. He reminds them that they must leave this world and that life is a brief sojourn; all beautiful things will pass. Couplets such as the following attest to the world’s sensual attractiveness: “This world is a bride dressed in green and red/One cannot get tired of looking at a new bride” (Yunus Emre Divani, p. 116; trans. Z. Baskal). Other couplets warn the reader not to be taken in by the world’s outward beauty: “Worshipping the world is like savoring a poisonous meal/The one who cares about the end of life abandons the meal” (Yunus Emre Divani, p. 88; trans. Z. Baskal). The aim is to redirect the reader’s focus from worldly things to the transitory nature of life.

Devotion to Allah becomes an alternative to fears of mortality: “The world is the enemy of people; the goal is the Soul of the souls (i.e., Allah)/One should know that the world passes, abandon the world, my dear” (Yunus Emre Divani, p. 170; trans. Z. Baskal). In one of the most masterful and harmonious couplets of Turkish literature, Yunus holds out the eternal reward of salvation for the faithful: “Why are you afraid of death? / Don’t be afraid! You will live forever” (Yunus Emre Divani, p. 49; trans. Z. Baskal).

Yunus Emre was a contemporary of the celebrated Sufi poet Rumi who had settled in the same region. Yunus made a point of writing, singing and speaking in spoken Turkish language of the common people of the day rather than adopting the Persian or Arabic speech that was prevalent in his own country, particularly amongst the sophisticated people. He was very skillful in describing quite abstruse Sufi concepts in a clear way to ordinary folks.

Legend has it that one day a stern teacher named Molla Kasim found a collection of Yunus Emre’s poetry. When he sat down by the river and began to read the poems, he found them contrary to his dogmatic religious understanding. He threw 1,000 poems into the river and 1,000 poems into the air. When Molla Kasim came to the 2,001st poem, he noticed that the couplet said: “O Yunus! Do not tell your words in a crooked way/Or Molla Kasim will come and straighten you.” The prediction of these words made Molla Kasim realize the insightfulness of the poet whose words he had just discarded, and he decided to keep the poems he still had in hand to pass on to future generations. Some interpret the story to mean that although Yunus Emre had his critics from the religious establishment, the power of his poetry eventually won them over.

Yunus Emre’s inspiration for his stupendous love of mankind comes from his deep understanding of the Qur’an, which begins with the phrase: ‘Bismillahir Rahmanir Raheem’ (meaning: In the Name of Allah, Most Gracious, Most Merciful). He, thus, put the love of Allah over the fear of Allah who is the only Master of the universe to whom all praises duly belong.

In the true spirit of Islam, which makes no distinction between race, color, ethnicity, rich or poor, Yunus recognized the unity of mankind. That is, all of us are brothers and sisters, and the children of Adam and Eve (Hawa). The person of merit is one who has taqwa or the fear of Allah in his/her heart so that he/she obeys Allah and His Messenger Muhammad (S) to the best of his/her abilities by doing good and abstaining from harmful acts. It is in recognition of this fact that Yunus Emre urges man to love Allah wholeheartedly.

The qalb or heart is the battleground for fighting nafs (soul, ego). Strife comes when one becomes prisoner of one’s nafs (ego, self) and knows only how to love oneself. As a Sufi who had gone through the rigorous discipline of tazkiyah-e-nafs, i.e., purification of the self, Yunus knew that in this remedial medicine, ego has no place but only servitude that matters. By serving and giving to others rather than being served and receiving and thereby, finding joy in the happiness of others lie the only remedy against the temptations of the nafs.

Yunus understood that the path of love starts with first loving Allah, the Creator, to truly love mankind, who created them all. Any deviation from this well-trodden path is only an illusion and is bound to fail.

General interest in Yunus Emre’s poetry has grown over the years, especially since Fuad Koprulu’s landmark study Turk Edebiyatinda Ilk Mutasavviflar (1918; The First Mystics in Turkish Literature). His poems have also been translated into English, German, French and Urdu. His poetry has been honored by the UNESCO, which proclaimed 1991 the International Yunus Emre Year, recognizing his poetry as a quintessential representation of humanistic values.

Yunus Emre’s poems convey a profound spirituality. His subject is the Heart, the point of awareness where God is realized in us. He sang,

“I am not here as a claimant,
My concern is one of love,
A friend finds a shelter only in hearts,
I’ve come to build some heart.”

A reading of his Divan –  the collected poems – shows that Yunus Emre has walked his talk. It is up to us to continue that vital task and make our world a better place for all to live in peace and harmony.