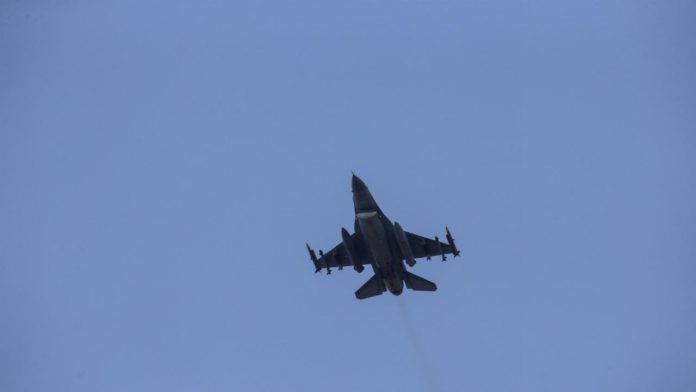 Egypt’s president warned that an attempt by Turkey-backed forces in Libya to attack the strategic city of Sirte would cross a “red line” and trigger a direct Egyptian military intervention into the conflict.

Egypt intervenes in neighboring Libya with the intention of protecting its western border with the oil-rich country, and to bring stability, Egypt wants conditions for a cease-fire, to Libya.

On the other side, Turkey said Haftar’s forces in eastern Libya need to withdraw from the strategic city of Sirte for a lasting ceasefire and accused France of “jeopardizing” NATO security by backing him.

El-Sissi spoke while inspecting Egypt’s air force and commando units stationed in the Sidi Barrani airbase in the country’s western region along the porous desert border with Libya, Egypt is ready to provide arms and training for Libyan tribes to “defend their country.” He also will support the tribal leaders.

Sirte would open the gate for the Tripoli-allied militias to advance even farther eastward, to potentially seize control of vital oil installations, terminals, and oil fields that tribes allied.

But Turkey’s Foreign Minister Mevlut Cavusoglu said that Hifter’s forces have lost the chance to engage in a political solution to the conflict because Hifter ignored previous calls for a peaceful solution, It’s impossible for Hifter to win.

Donald Trump has joined the calls for a ceasefire in Libya amid concerns that Egypt would be willing to send ground troops into the country to prevent a rout of its ally Haftar.

Egypt’s president has announced before an initiative to end nearly a decade of civil war in Libya, whose siege of the capital, Tripoli collapsed this week. The aims of the initiative to stop the ceasefire this meant to pave the way for elections. He called for peace talks in Geneva and the exit of all foreign fighters from Libya. Also, there can be no stability in Libya unless peaceful means to end the crisis are found, which include the unity and integrity of the national institutions.

The results of the initiative establish an elected presidential council, with representatives from Libya’s three regions, ruling for an 18-month transition period until elections are held. It prescribes the unification of all financial and oil institutions, and the disbanding of militias to give state forces a monopoly over power.

Aguila Saleh, speaker of the country’s Tobruk-based House of Representatives Support that initiative, on the other side there were no representatives of the UN-recognised government of national accord (GNA) based in Tripoli. They want to continue fighting to recapture the city of Sirte from Haftar’s forces, who had seized it in January.

Western powers are urging forces loyal to the GNA not to exploit its new military advantage by pushing deep into the east but instead to allow peace talks to resume with the aim of creating a new government of national unity.

The standoff came as a Greek helicopter, operating under the aegis of a European Union operation to enforce a UN arms embargo, moved to interrupt a Turkish cargo ship bound for Libya. the Greek helicopter linked by the Greek frigate Spetsai approached the Turkish cargo ship, prompting, this is a good chance for Turkish to defense, according to that highlights the risk in allowing Greece to take a prominent role in the EU’s arms embargo enforcement since Greece is not seen by Turkey as a neutral party, but it’s opponent.

US military command in Africa warned that Russia, which supports Haftar, was pouring fighter planes into the country, and possibly seeking to establish a permanent airbase. Also, the US needs Turkish president, Recep Tayyip Erdoğan, with quick and good-faith negotiations are now required to implement a ceasefire and relaunch the UN-led intra-Libyan political talks.

The United Nations mission in Libya said it was horrified by the reported discovery of mass graves in the town of Tarhouna after the internationally recognized government recaptured it from eastern-based forces. We need International law requires that the authorities conduct prompt, effective, and transparent investigations,” it said in a statement.

In addition, the Government of National Accord (GNA), which is recognized by the United Nations, retook control of Tarhouna after the eastern-based Libyan National Army (LNA) of Khalifa Haftar pulled out and the set up a committee to investigate the discovery of mass graves, but it has not yet said how many bodies have been found so far.

The LNA is backed by the United Arab Emirates, Egypt, and Russia. While Washington has said it opposes Haftar’s offensive, it has not thrown its support behind the GNA. It has also lambasted Russian involvement in support of Haftar.

Libya’s conflict has taken a new turn. In a series of rapid victories, the GNA has, with Turkish support, suddenly brought most of northwest Libya back under its control, dashing Haftar’s bid to unite the country by force with help from Egypt, the United Arab Emirates, and Russia.

While the United States has said it opposes Haftar’s offensive, it has not thrown its support behind the GNA. It has also lambasted Russian involvement, a stance reiterated.

Egypt has also called for a ceasefire starting as part of a wider political initiative, which was welcomed by Russia and the UAE. Turkey dismissed it as an attempt to save Haftar following the losses he suffered on the battlefield.