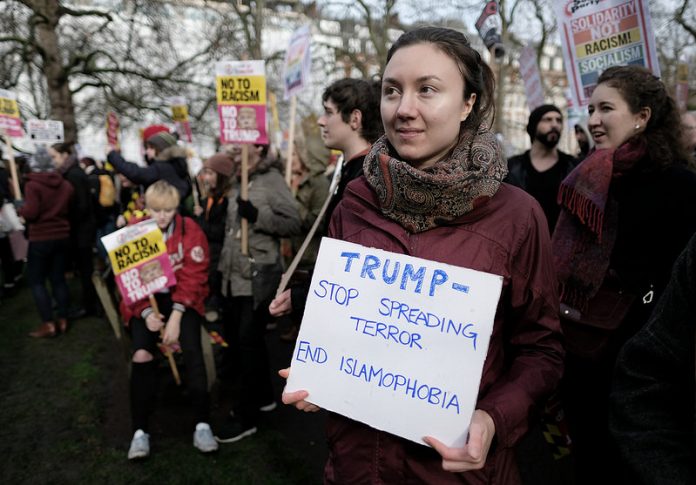 Are anti-Arab and anti-Muslim sentiments on the rise in the US? And what are the best ways to combat them? These were some of the questions we discussed at the 2017 “Global Peace and the Fear of Islam” Forum held this past week in Abu Dhabi, UAE.

Based on our most recent Arab American Institute (AAI) survey of American public opinion, conducted in conjunction with Zogby Analytics (ZA), I was happily able to report to the Forum that negative attitudes toward both communities appear to be in decline. I also noted that in charting a way forward it was important to consider that since much of the hostility toward both communities has been politically manufactured, part of the solution must be political.

Things did change in the aftermath of 9/11 but not as badly as some had feared. While there were those who deliberately fanned the flames of hate and suspicion, they were countered by push-back emanating from the White House, the creators of popular culture in Hollywood, and a wide range of religious, ethnic, and civil rights organizations. It was, nevertheless, a difficult period for both communities.

Despite President Bush’s admonitions, some Republican political figures, think tanks, and funders perceived that there might be an electoral advantage in propagating and exploiting anti-Muslim sentiment. With the nomination and then election of Barack Obama, these purveyors of hate felt they had an ideal target. Preying off of both the widespread economic insecurity created by the economic downturn of 2008 and the perceived “foreignness” of Obama (his race, his name, and his Kenyan father’s religion), a conservative group spent millions of dollars producing and widely distributing a hate-filled film that warned of Muslim efforts to take over America – with the—presumption being that with the election of Obama they were getting closer to their goal.

On one level, this effort to undercut Obama failed since he was twice elected. The campaign of hate did, however, leave a lasting mark on Republican attitudes toward Islam and Muslims. And it continued to grow.

First came the “birther movement”—spreading the notion that Obama was secretly a Muslim, wasn’t born in America, and therefore wasn’t legally entitled to serve as president. As late as our 2015 poll we found that over 60% of self-identified Republicans believed Obama wasn’t really born in the US and was secretly a Muslim.

During this same period, funded by conservative donors, a nation-wide effort was launched to get states to pass legislation banning Sharia law. The effort was ridiculous—since no one had ever proposed introducing Sharia law in the US. Ridiculous or not, the effort ultimately was considered by 27 state legislatures raising the specter of the Muslim take-over of America. These same groups sponsored “studies” purporting to demonstrate that Muslim groups, with Obama’s support, had succeeded in infiltrating the government. This effort was repudiated by a host of political leaders and organizations. While it spread fear in the Muslim community, it failed to dislodge loyal Muslim Americans from government service.

In 2010, Republicans, joined anti-Muslim hate groups in opposing the proposed construction of an Islamic community center in Manhattan about 10 blocks away from Ground Zero. Led by former Congressman Newt Gingrich, they termed the center a “Victory Mosque”, claiming it was intended by Muslims as a declaration of victory over America. Based on this theme, the Republican congressional campaign committee produced TV ads for use in 17 congressional races. The ads warned about the dangers of the “Victory Mosque” and challenged Democratic candidates to declare opposition to this “Muslim insult to America.”

While this GOP effort also failed, since in only one of the 17 races did their candidate win, once again damage was done in promoting hatred and fear of Muslims among Republicans.

Exploiting anti-Muslim sentiment was also a feature of the 2012 and, of course, in the 2016 Republican presidential contests. It failed in 2012 when it was repudiated by the GOP’s nominee, Mitt Romney, but it won in 2016 with the victory of Donald Trump.

As a candidate and then as president, Trump worked hard to promote and exploit the fear of Muslims. The arguments he made in defense of his Muslim ban, his disgraceful behavior toward the Muslim Gold Star parents who spoke at the Democratic Convention, and the Islamophobes he appointed to serve in the White House—all had an impact on the public’s attitudes. But the impact has not been what Trump may have expected.

It appears that the president’s policies, intemperate rhetoric and erratic behavior have not only driven down his own approval ratings, they have also caused many Americans from both sides of the partisan divide to reject some of his views. It’s what I call the “Trump effect.”

In our most recent AAI/ ZA poll of American public opinion, we find that favorable attitudes of Arabs, Muslims, Arab Americans and American Muslims have actually risen to their highest levels in the past decade, with majorities now having favorable attitudes toward both Arab Americans and American Muslims, and a plurality positively inclined towards Arabs and Muslims. While the greatest increases in favorable attitudes came from Democrats and Independents, positive ratings were also up among Republicans. There remains, however, a deep partisan split—with Republicans still decidedly more hostile to both Arabs and Muslims than Democrats or Independents.

The division between Democrats and Independents on the one side and Republicans on the other is even more pronounced on matters of policy affecting Arabs and Muslims. A strong plurality of Americans, for example, opposes banning Muslim or Middle Eastern immigrants or visitors from entering the US. But while Trump supporters favor banning immigrants and visitors for the Middle East, by a 60%/21% margin, only 12% of Trump opponents support such a ban, with 72% opposing.

Seen in this context, we can take some satisfaction in Doug Jones’ defeat of Roy Moore in Alabama’s special election for the US Senate. With Moore’s loss, another anti-Muslim bigot bites the dust.

Moore is an Islamophobe and isn’t shy about letting folks know. On different occasions, Moore once called Islam a “false religion”, made the bizarre claim that there were cities in America where Muslims had already imposed Sharia law, and remarked that Keith Ellison’s Muslim faith should have disqualified him from serving in Congress. That a notorious pair of Islamophobes like Steve Bannon and Sebastian Gorka came to Alabama to campaign for Moore only served to reinforce his deplorable bigotry.

With Moore now consigned to the “dustbin of history”, we can hope that another nail has been pounded into the coffin of this decade-old phenomenon of Republican-generated anti-Muslim bigotry.

Maybe this will be a wake-up call for the GOP. Promoting bigotry against Muslims hasn’t worked. It has polarized the country without producing any tangible electoral results. And while it has caused real pain, including an increase in hate crimes against Arabs and Muslims, it has also generated significant support for both communities. It is time for Republicans to step forward and reject those in their ranks who have promoted this campaign of hate.