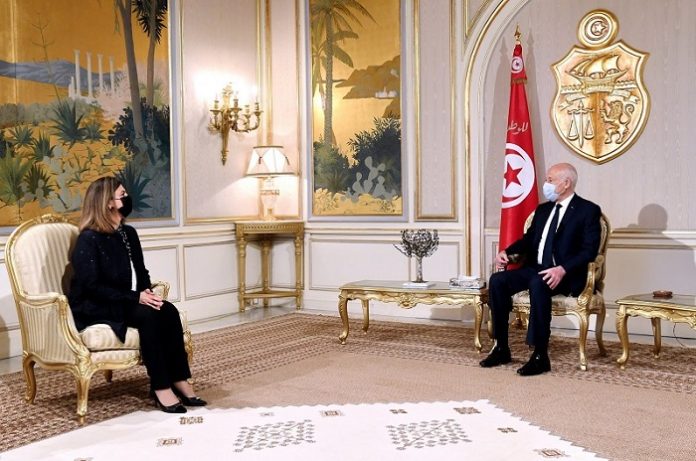 The meeting, held at Carthage Palace, focused on the fraternal and partnership relations binding Tunisia and Libya as well as means to diversify them.

President Saied highlighted the common destiny and objectives of the two countries, calling for exemplary relations, based on visions and innovative mechanisms. He also stressed the importance of developing new forms of partnership for a better future for the two brotherly peoples.

The Tunisian president expressed his satisfaction with the positive political developments in Libya, thanks to the will of its people. He reiterated Tunisia’s readiness to continue to put its experience at the service of the Libyans and to support them in the upcoming political developments.

For her part, the Libyan minister referred to the “historic” visit made by Kais Saied to Libya last March and the importance of the messages it contained.

Ms. Mangoush said she conveyed to President Saied the greetings of the President of the Presidential Council and the Head of the National Government of Unity, and their willingness to work for the consolidation of cooperation and partnership relations with Tunisia in various fields.

The Libyan foreign minister indicated that she chose Tunisia as her first foreign destination as a token of recognition of the positive role played by Tunisia during the Libyan crisis.