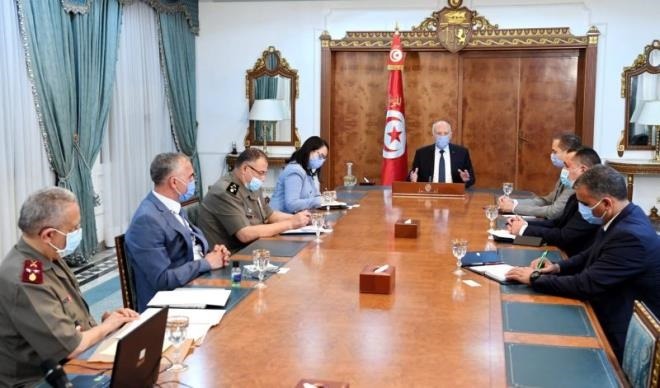 During an emergency meeting held with military and security officials to examine the health situation in the country, the Head of State stressed that the national responsibility is not based on political calculations, competition or rivalry, but requires the unification of efforts and measures to be taken in the coming period, according to a Presidency statement issued on Sunday.

“This emergency meeting is not in competition with any party, but dictated by national responsibility which must prevail over all narrow political or partisan considerations,” President Saïed said, stressing that Tunisia “is in a state of war, which requires the unification of efforts and the involvement of people of goodwill”.

During the meeting, a number of proposals were discussed, including the division or classification of endemic areas in descending order and focusing on the most affected areas to limit the spread of the virus.

The President underlined that these proposals must be placed in a different framework that takes into account not only scientific aspects but also socio-economic conditions.

According to the Tunisian Ministry of Health, out of 17,647 people tested for COVID-19 on 2 July, 6,184 new infections, including 82 mortalities, were recorded in the North African nation.