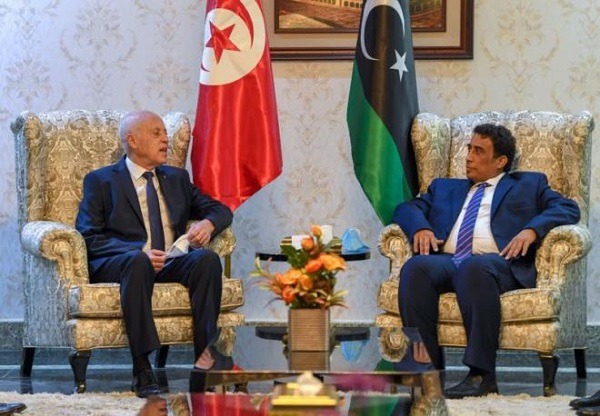 Tunis (UNA-OIC) – Tunisian President Kaïs Saïed had a talk in Tripoli on Wednesday with Chairman of the Libyan Presidency Council Mohammad Menfi.

Emphasis was placed on the “need for Tunisia to keep on supporting the Libyan democratic process as Tunisia’s security is tightly linked to Libya’s”, according to a Presidency statement carried by Agence Tunis Afrique Presse (TAP).

It added that light was also shed on the importance of this visit “which testifies to the strong historic ties binding the two countries” and demonstrates that relations will match up to the level of these ties”.

Saïed and Menfi agreed to devise an action plan to boost trade and investment, notably by facilitating border crossing procedures as well as financial procedures between the central banks of the two neighboring countries. They also agreed to share expertise and scale up cooperation in a wide range of fields by means of convening high joint commissions in the shortest time possible.

It noteworthy that President Saïed concluded a one-day official visit to Libya on Wednesday aimed at consolidating the process of cooperation between the two countries and laying foundations for stability and development.

First Person: ‘Disability reminds us that there is no such thing as normal’

Saudi Arabia to allow direct entry from all countries for people...