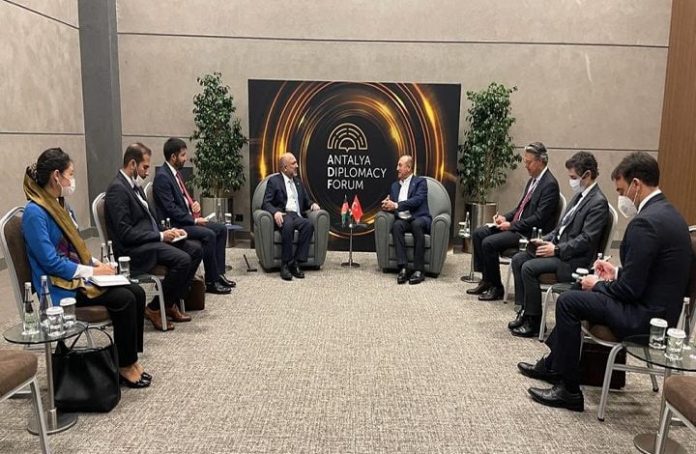 Kabul (UNA-OIC) – Afghan Foreign Minister Mohammad Hanif Atmar met with his Turkish counterpart Mevlut Cavusoglu on the sidelines of Antalya Diplomacy Forum 2021, according to a statement issued on Sunday by Afghanistan’s Ministry of Foreign Affairs.

Atmar appreciated Turkey’s cooperation with Afghanistan in various fields, describing the Turkish role as very important in restoring peace and achieving a lasting ceasefire in the country.

Pointing to the full withdrawal of the Resolute Support forces from Afghanistan, the minister spoke in detail about what he called a new chapter of cooperation with Afghanistan and the importance of expansion of relations between the two countries.

In turn, the Turkish Foreign Minister touching on the recent NATO Summit in Brussels, saying his country is committed to cooperating with and supporting Afghanistan, particularly in facilitating the Afghan peace talks, preserving the joint achievements of the last two decades, and ensuring the Kabul Airport security, as well as giving attention to the investment projects in Afghanistan.