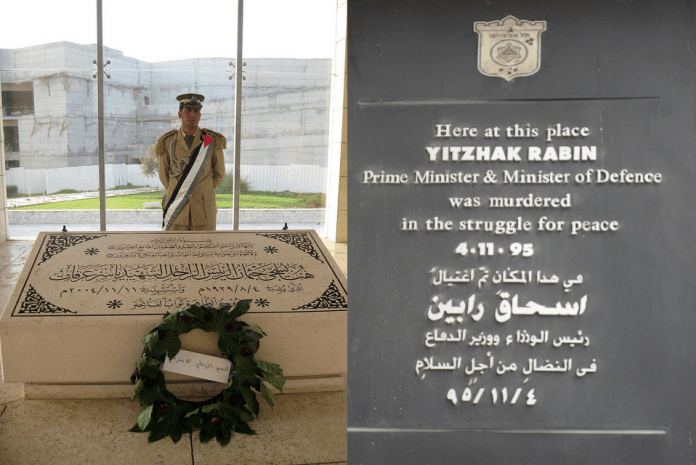 DURING THE last few days, I met with two old friends: Yasser Arafat and Yitzhak Rabin.

Well, the term “friends” may not quite be appropriate. Certainly, Arafat called me “my friend” in a recorded message for my 70th birthday, but Rabin called nobody “friend”. That was not his character.

I am glad that I knew both from close up. Without them, my life would have been poorer.

I DON’T think I ever met two more different people than these two.

Arafat was a warm person. An emotional person. His embraces and kisses were ceremonial, but they also expressed real sentiment. I brought many Israelis to meetings with him, and they all recounted that after ten minutes in his company they felt as if they had known him for years.

Rabin was the exact opposite. Like me, he abhorred physical contact. He was remote. He did not exhibit feelings. Only on close acquaintance did he reveal himself as having quite strong feelings indeed.

But these two so different persons had one thing in common. Both were fighters throughout their lives. Rabin gave up academic studies in order to join the illegal Palmach (“shock troops”) during the time of British rule. Arafat gave up a career as an engineer in Kuwait in order to set up the PLO (Palestine Liberation Organization). Rabin was six years older.

Both devoted the major part of their adult life to fighting for their peoples – and against each other. Both were not gentle in their wars. Rabin once ordered soldiers to “break their (the Palestinians’) arms and legs!” Arafat ordered many cruel actions.

After a long life of war, both turned towards the way of peace. That was much more dangerous. Rabin was murdered by a Jewish fanatic. Arafat was murdered (as I believe) in a more sophisticated way by the agents of Ariel Sharon.

I WAS privileged to hear from both how and why they made their fateful turn towards peace.

Arafat’s explanation was simpler. It went more or less like this (in my words):

Then came the October 1973 war (called the “Yom Kippur War” in Hebrew). The two strongest Arab armies attacked Israel. They achieved total surprise and on the first day obtained imposing results. The Egyptians overran the Israel Bar-Lev line, and the Syrians approached the Sea of Galilee.

And lo and behold, in spite of these initial successes, the Arabs were defeated in the war. When a cease-fire was imposed, the Israeli army was close to Damascus and their way to Cairo was open.

From that, I drew the conclusion that there was no way to overcome Israel on the battlefield. Therefore I decided to attain the Palestinian aims by peaceful means.

So Arafat entered the path which began when his emissary, Sa’id Hamami, started secret talks with me in London, the path that eventually led to Oslo.

THE PATH of Rabin towards peace was more convoluted. He explained it to me at length one Shabbat afternoon at his home after the Washington handshake (to which he did not invite me, unlike Begin, who invited me to a dinner with Sadat in Egypt. Rabin was Rabin.)

Here is Rabin’s story (in my words):

After the Six-Day War, I believed, like almost everybody else, in the so-called “Jordanian Option”. Nobody believed that we could hold on to the territory we had conquered, and we thought that King Hussein would make peace with us if we returned all the territories, except East Jerusalem. After all, the king’s capital was Amman so what did he need Jerusalem for?

That was a mistake. One day the king declared that he no longer had any connection with the West Bank. We were left without a partner. Somebody invented an artificial partner, the “Village Leagues”. Within a short time, it became clear that this was nonsense.

I took the initiative and invited all the local leaders in the West Bank, one after the other. All of them expressed their readiness for peace with us, but in the end, they concluded: our address is Yasser Arafat.

Then came the Madrid conference. The Israelis agreed to a joint Jordanian-Palestinian delegation, not including Faisal Husseini, who was a resident of East Jerusalem. The moment the deliberation reached the Palestinian issue, the Jordanian members stood up and said: “Sorry, this does not concern us.” The Israelis were left in the room alone with the Palestinians.

Husseini sat in the adjoining room, and whenever the discussion reached a sticking point, the Palestinians said: “now we must consult with Faisal”. This soon became ridiculous, so Faisal was invited into the room.

At the end of every day of discussion, the Palestinians said: “Now we must phone Tunis to get instructions from Arafat.” This situation looked ridiculous to me. When I returned to power, I decided that if this is the situation, let’s talk directly with Arafat. That was the background of Oslo.

I WISH I could honestly say that I influenced Rabin in the long conversations we had, nearly all of which had one sole subject: peace with the Palestinians. But I am not sure that this is so. It was almost impossible to influence Rabin. He analyzed facts and drew conclusions. Both of them, Rabin and Arafat, the soldier and the engineer, were logical thinkers. They analyzed facts and drew conclusions.

My conversations with Arafat started in Beirut when I entered the beleaguered city. The meeting attracted attention throughout the world. It happened after my long secret discussions with his emissaries, Sa’id Hamami and Issam Sartawi (who were both murdered by the agents of Abu Nidal, the leader of an extreme Palestinian group). I reported to Rabin about these conversations, after Arafat encouraged me to do so.

After the evacuation of the PLO from Beirut, I visited Arafat many times in Tunis and other places. When Arafat came back to Palestine, after Oslo, we met first in Gaza then in the Mukata’a (a former British police building) in Ramallah. Twice, when it seemed to us that his life was in immediate danger, my friends and I went to live there as a “human shield”. Sharon later admitted that our presence there had deterred him from killing Arafat then and there.

My conversations with Rabin took place in his Balfour Street office, mostly on my initiative. In between, we met at various parties, generally near the bar. Since he had attended the British Academy for senior officers, Rabin was addicted to whiskey (and only whiskey). Several times we met at the place of my friend, the sculptress Ilana Goor, who arranged parties for the secret purpose of getting us two (and sometimes Ariel Sharon) to meet. After midnight, when all the other guests had gone home, Rabin – completely sober after innumerable glasses of whiskey – gave me detailed lectures.

All these conversations were about the Palestinian problem (except one, when he chastised me for publishing damning exposures about his party members in my magazine.)

The last time I had visited the place was at his funeral. Now the grave is a tasteful small building with two ceremonial guards. Behind it is Arafat’s office, and the rooms where he used to meet the Israeli delegations which I brought to him, and even his small, spartan sleeping quarters. I paid my respects.

My meeting with Rabin was a few days later, at the annual mass event on the anniversary of his murder, at the same square which now bears his name.

It was the most curious event I ever took part in. This year it was not called by the Labor party, whose new leader wants to keep as much distance from peace as possible. By default, two groups – previously unknown to me – took over. One consists of former army officers, one is of obscure origin.

Their arrangements were bizarre. They decreed that the slogans would not touch the subject of peace, but only Rabin’s military and party career. Within the peace camp, a violent discussion broke out – to attend or not?

I strongly advised attending. To my mind, the slogans of the initiators were immaterial – important was only the number of those coming to pay respect to the man and his heritage. Rabin and peace with the Palestinians are inseparably linked.

In the end, nearly a hundred thousand people attended, shouting peace slogans and completely ignoring the directions of the organizers. When a leader of the West Bank settlers (who was invited!) made a speech, the whistling of the crowd was deafening. I must admit, to my shame, that I whistled with the rest.

To my own surprise, it turned out that I am a pretty good whistler.