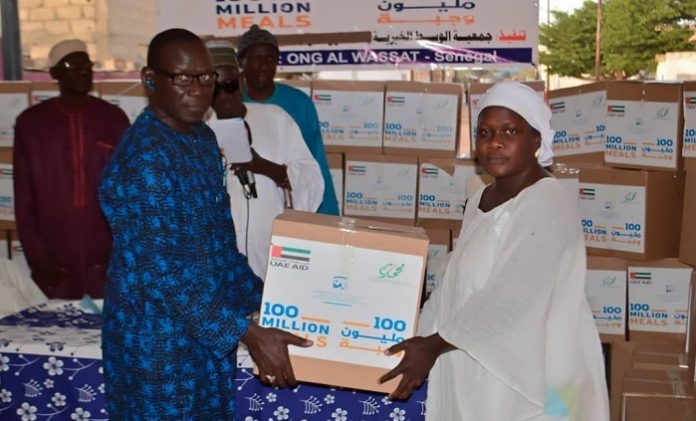 Dubai (UNA-OIC) – The “100 Million Meals” campaign’s food parcels distribution has been completed in Tanzania, Kenya and Senegal, providing more than 750,000 meals to low-income individuals and families.

In collaboration with the Mohammed bin Rashid Al Maktoum Humanitarian and Charity Establishment (MBRCH) and the local authorities and charities, parcels of easy-to-store food items, including rice, flour, oil, and sugar, were distributed to empower beneficiaries to prepare their own meals. One food parcel sustains a family of five for one month.

In coordination with the UAE Embassy in Dar es Salaam in Tanzania, 240,000 meals were distributed in the Wete District on Pemba Island, Makonde and Bangui districts on Unguja Island in Zanzibar, as well as in the Kigoma Region.

The UAE Embassy in Nairobi, Kenya, supported the distribution of 342,000 meals in the capital, as well as in the Mombasa, Asilia, Wajir, and Lamu regions. Whilst, the UAE Embassy in Senegal’s Dakar coordinated with Al Wasaat Charity Association, to distribute 172,800 meals in Tivawan and Gombe.

Ibrahim Mohammed Bu Melha, Advisor to Ruler of Dubai for Cultural and Humanitarian Affairs and Deputy Chairman of the Board of Trustees of MBRCH, said that the campaign reflects the values of kindness and generosity which are deeply embedded in the UAE’s society. “Philanthropy and taking the initiative to help people across the world regardless of race, color or nationalities, have been at the core of the UAE’s humanitarian philosophy.”

“The completion of the distribution of food parcels in three new countries provides an immediate safety net for thousands of families in need and empowers them against hunger and malnutrition while strengthening the UAE’s global humanitarian role,” he added.

Sultan Mohammed Al Shamsi, Assistant Minister of Foreign Affairs and International Cooperation for International Development Affairs, said that the UAE’s embassies and diplomatic missions abroad, in coordination with local authorities and charity organizations, play a vital role in the success of field and logistical operations to deliver the food aid provided by the campaign.

“The UAE’s humanitarian initiatives represent a sustainable path that is constantly evolving and expanding in charity and relief work, in parallel with the swift response to crises and challenges around the world,” he added.

The campaign is a practical response to the global challenge of hunger and malnutrition that has doubled in the wake of the COVID-19 pandemic, threatening 821 million people around the world. The campaign falls under the Humanitarian Aid and Relief pillar, one of the five main pillars of the work of Mohammed bin Rashid Al Maktoum Global Initiatives.