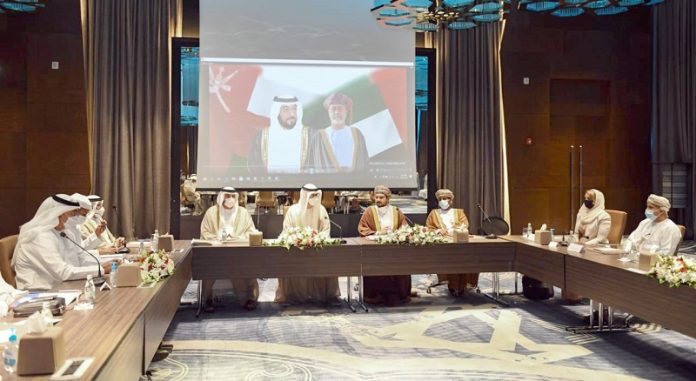 Abu Dhabi (UNA-OIC) – UAE Minister of Industry and Advanced Technology Dr. Sultan Ahmed Al Jaber on Monday led an Emirati delegation to the Sultanate of Oman, accompanied by representatives of several government entities and private-sector companies.
Dr. Al Jaber met with Qais bin Mohammed Al Yousef, Minister of Commerce, Industry and Investment Promotion in the Sultanate, and a number of officials in related sectors.
The visit explored ways to broaden cooperation between the two countries at both governmental and private-sector levels, especially in the areas of industry, advanced technology and quality infrastructure.
Al Jaber conveyed the greetings of the UAE leadership to the leaders of the Sultanate, stressing the deep and abiding relations between the two countries, which are based on close historical ties and the development of common interests. Bilateral ties between the two were first laid down by the UAE’s founding father, the late Sheikh Zayed bin Sultan Al Nahyan, and the late Sultan Qaboos bin Said.
Al Jaber said the continued strength of the bilateral relations between the countries is a source of encouragement and pride, adding that he is looking forward to further enhancing cooperation in the areas of industry and advanced technology. He noted that the next steps will focus on creating investment opportunities and facilitating measures for investors.
Read more…