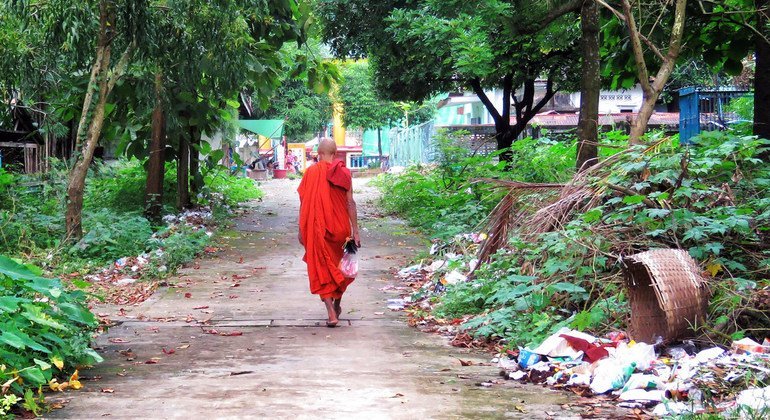 Speaking at an informal General Assembly meeting on the Myanmar crisis, Special Envoy Christine Schraner Burgener said, “I told you in 2019 that I would sound the alarm if necessary…This is now the case”.

The situation in Myanmar is “fragile and fluid”, the UN envoy said, calling it “a people’s fight without arms”.

She underscored the urgency in helping to lay the foundations of a “pluralistic democracy”, balanced with the complex domestic challenges of the civilian leadership.

“I have tried again and again to explain the complex situation, namely that the army holds the real power”, the UN envoy said. “Genuine democracy requires civilian control over the military”.

Noting that “the takeover has not stabilized”, the UN official upheld that the international community must “not lend legitimacy or recognition to this regime”.

She labeled it a “coup”, calling the military takeover and declaration of the state of emergency “a clear violation of the constitution regardless of what they claim”.

Recalling that the National League for Democracy (NLD) had won the November election with 82 per cent of the vote, Ms. Schraner Burgener emphasized: “There is no justification for the military’s actions, and we must continue to call for the reversal of this impermissible situation, exhausting all collective and bilateral channels to restore Myanmar’s path on democratic reform”.

Responding to the envoy, Myanmar’s Ambassador to the UN, Kyaw Moe Tun, announced that he was representing not the military leadership, but the NLD, saying he was speaking instead, for the democratically-elected parliamentarians of the country.

Denouncing the coup, he said that the continued and strong support for the people, was “imperative”, and appealed for all Member States and the UN, to condemn the takeover, and take “all strongest possible measures to stop the violent and brutal acts committed by the security forces against peaceful demonstrators, and end the military coup immediately”.

His voice breaking in the General Assembly Hall, he gave the three-fingered salute adopted by protesters in Myanmar.

The Ambassador said he would join those continuing “to fight for a government which is of the people, by the people, and for the people.”

Although the Secretary-General had called on Myanmar’s military and police to ensure the right of peaceful assembly, hundreds of people are being detained without charges or fair trial proceedings, leaving frantic families unable to locate or contact them, according to the UN envoy.

“Ongoing violence, intimidation and harassment by security personnel, and deliberate acts to create insecurity and instability, as well as the enactment of draconian laws which deprive people of their basic human rights, some of which are also in violation of their own Constitution, are egregious”, she said.

Among other grievances, Ms. Schraner Burgener pointed to the release of some 23,000 prisoners associated with political murders as “regretful”, and the ensuing chaos as a lost opportunity for an inclusive response to the COVID-19 pandemic.

With her “unique access to key stakeholders”, the UN official has directly relayed international concerns, advocated for dialogue and requested a country visit in which she meets with detained government leaders, which was rejected.

“It seems they want to continue making large-scale arrests and have been coercing people to testify against the NLD Government”, she said. “This is cruel and inhumane”.

Ms. Schraner Burgener urged influential Member States to step up, saying they have “a collective responsibility towards the people of Myanmar and safeguard their democratic aspirations”.

“Clearly, regional engagement is needed on all fronts”.

If there is any escalation in terms of military brutality against people exercising their basic rights, “let us act swiftly and collectively”, the UN envoy said.

At the same time, independent UN human rights experts called on the military to end the violent crackdown on peaceful protests.

The experts also spoke against the arbitrary detention and harassment of those voicing their dissent or organizing and participating in peaceful protests as well as the journalists covering the events.

“Deliberate attacks on journalists and their arbitrary detention are serious violations of international human rights law and must immediately stop.”

The experts noted “a worrying series of regulatory measures” that would entrench military control over internet information and strip individuals of their human rights.

“These vague and overly broad provisions would give the military unfettered power to censor dissenting voices on social media, disrupt the internet at will and access user information with no restraint or regard for their right to privacy”, they said.

The experts urged the military to restore democratic institutions and ensure the release of all those detained for exercising their human rights.

“We warn the military junta that those who are responsible for repression and killing of peaceful protesters as well as the detention of government officials and journalists will be held accountable before international jurisdictions”, the experts said.

Independent experts are appointed by the Geneva-based UN Human Rights Council to examine and report back on a specific country situation. The experts are not UN staff, nor are they paid for their work.