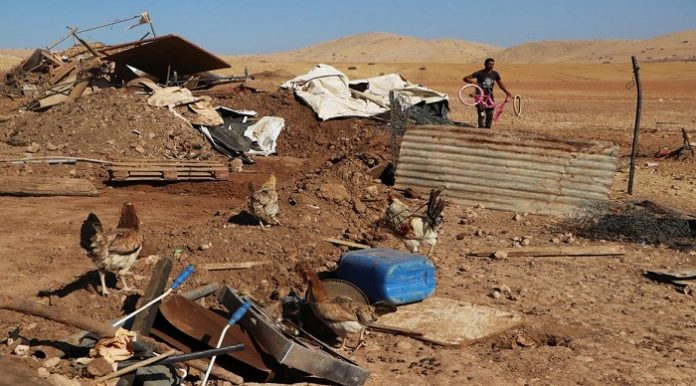 Geneva (UNA-OIC) – The UN Special Rapporteur on the situation of human rights in the Palestinian Territory occupied since 1967, Michael Lynk, condemned the demolition by Israel of the homes and property belonging to the Palestinian Bedouin community of Humsa al-Bqai’a, in the northern Jordan Valley of the occupied West Bank.
On 7 July, the Israeli Civil Administration – the arm of the Israeli army which administers the occupation of the West Bank – accompanied by military troops, demolished 27 residential shelters, animal structures and water tanks, and confiscated the community’s belongings.
According to reports, 11 households – comprising around 70 people, including 35 children – were displaced. Among the sequestered possessions were food, water and clothing, leaving the community without shelter and sustenance in the summer heat of the Jordan Valley.
The community appears to be at a high risk of forcible transfer, Lynk said. Prior to the demolition, the Israeli Civil Administration had proposed to transfer the community to a different location.
“This demolition is both unlawful and heartless,” said the human rights expert. “As the occupying power, Israel is strictly forbidden from destroying Palestinian property unless it is absolutely required by military necessity during active armed operations.
http://english.wafa.ps/Pages/Details/125385