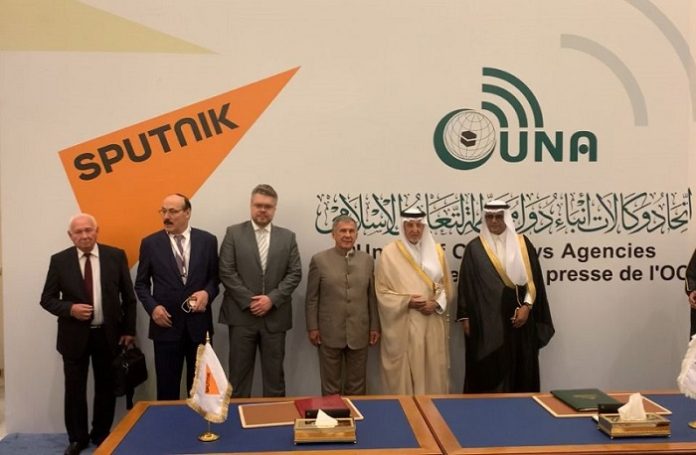 Jeddah (UNA-OIC) – Adviser to the Custodian of the Two Holy Mosques, Governor of Makkah Region Prince Khalid Al-Faisal and Tatarstan President Rustam Minnikhano witnessed Wednesday the signing ceremony of a memorandum of cooperation between the Union of OIC News (UNA) and Russia’s Sputnik News Agency and Radio.

The agreement was signed by Acting UNA Director-General Mohammed bin Abd Rabbo Al-Yami and Sputnik Director for International Cooperation Vasily Pushkov, on the sidelines of the meeting of the Group of Strategic Vision: “Russia – Islamic World” currently being held in Jeddah, Saudi Arabia.

The memorandum aims to enhance cooperation between UNA and Sputnik in the area of joint media work, news exchange, and the advancement of the media industry in Islamic countries, in addition to coordination between the two institutions in providing training programs and media consultancy.

Al-Yami stressed that the memorandum will contribute to strengthening the media presence of the news content of the Islamic countries’ news agencies in the Russian media, given the fact that Sputnik agency delivers a wide range of news services on radio and online. He added that the agreement will also support press publication on topics of common interest, such as strengthening interreligious and intercultural dialogue and confronting hate speech and extremist ideology.

Al-Yami expressed his gratitude to the Group of Strategic Vision: “Russia – Islamic World” for coordinating the meetings between UNA and Sputnik. He also expressed his thanks to Russian Permanent Representative to the Organization of Islamic Cooperation (OIC) Ramazan G. Abdulatipov, and his efforts in facilitating the signing of this memorandum.

In turn, Pushkov reiterated the great importance of the UNA as an international organization that brings together about 57 official news agencies in Islamic countries, pointing out that the memorandum signed today will allow Sputnik direct access to these agencies and thus diversify its news sources and support its media coverage of the Islamic world news, which is of constant interest to Sputnik and its various news platforms.