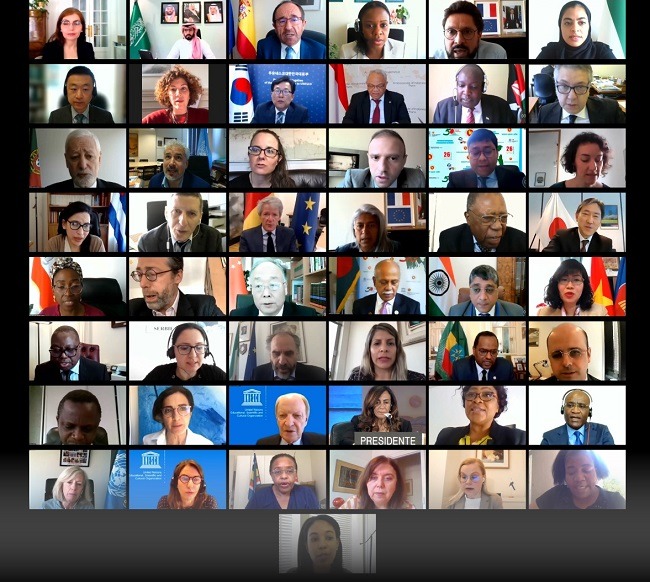 Abu Dhabi (UNA-OIC) – The United Nations Educational, Scientific and Cultural Organization (UNESCO) Executive Board unanimously adopted the first UAE-led decision submitted to it entitled “A Framework for Culture and Art Education,” which was developed to enhance cooperation between culture and education.

In line with the UN 2030 Agenda for Sustainable Development, the draft decision submitted by the UAE calls for harnessing culture in education by expanding learning outcomes, capacities and skills for all through a broad spectrum of opportunities provided by culture, including heritage and cultural and creative industries (CCI) in formal and non-formal education, lifelong learning, encompassing digital technology. The proposed Framework also intends to benefit different Member States according to their unique needs.

The decision was adopted during the 211th session of the UNESCO Executive Board which took place virtually from 7th to 21st April 2021, where the UAE-led proposal received unanimous support from the UNESCO Member States and was co-sponsored by 45 countries. Member States expressed their appreciation for the decision and underscored the significance of UNESCO’s inter-sectoral cooperation in Education and Culture.

Noura bint Mohammed Al Kaabi, Minister of Culture and Youth and Chair to the National Commission for Education, Culture and Science, stressed the importance of the proposal in her statement noting that “Culture and Arts Education is the first step to supporting talent. Across diverse fora, Member States have called for further reflection on existing frameworks on education and culture, to adapt them to contemporary evolutions.”

Al Kaabi pointed out that the decision builds on UNESCO’s previous work and existing frameworks to provide systematic support tailored for all players in the cultural and arts fields in the digital era and beyond. She added that this will ensure robust and comprehensive learning opportunities and strengthen sustainable growth.

Salma Al Darmaki, Secretary-General of the UAE National Commission for Education, Culture and Science, said, “The United Arab Emirates has noted the need for more practical expert and international dialogue on best practices and emerging trends related to culture and arts education. The proposed framework builds on UNESCO’s efforts as well as the solid foundation provided by the two World Conferences on Arts Education convened by UNESCO in 2006 and 2010 respectively in Portugal and the Republic of Korea.”

“The world has changed since then. We have new technologies, new education and cultural concepts, and our aspirations for those sectors have also evolved,” she added.

Al Darmaki stated that the decision will initiate the development of clear guidelines on Culture and Arts Education as well as related policies within and beyond schools for the Member States, that can be integrated into curricula or other programs.

“This year is the International Year of Creative Economy for Sustainable Development. To develop a strong creative economy, we need to invest in, nurture and educate talent. Culture, the arts, and the creative industries are creative sectors by their nature, therefore, creativity is considered a core foundation for this initiative.

“The addition of ‘culture’ in the term ‘arts education’ was to incorporate the range of cultural and creative fields that coincide with the arts. It is important to capture the intangible aspects of culture required to nurture the arts, as well as, heritage, and the soft skills required for creative economies to thrive,” she elaborated.

The decision stresses the importance of education and culture in all its aspects in achieving sustainable development, recalling in particular provisions contained in the objectives of the 2005 Convention on the Protection and Promotion of the Diversity of Cultural Expressions, which reaffirms the fundamental role that education plays in the protection and promotion of cultural expressions.

The decision also encourages member states and UNESCO to review their approach to culture and arts education to encompass contemporary advances and seize the opportunities of the digital era to support and promote reflection and initiatives in this domain.

The decision also requests that the UN cultural agency initiate a global consultation on culture and arts education aimed at identifying trends and gaps to be filled in this area and establishing “Guidelines and Policy Recommendations on Culture and Arts Education” in 2022.

Furthermore, the decision requests that the UNESCO Director-General develop a framework on culture and arts education to serve as a comprehensive guiding reference, best practice manual and toolkit for all member states based on the global consultation.

The document also requests the Director-General to invite member states to express their interest in hosting an online, or in-person, world conference on culture and arts education as an intergovernmental meeting in 2023, building on the “Guidelines and Policy Recommendations on Culture and Arts Education” to adopt a revised framework on culture and arts education. In addition to requesting that further action be taken, drawing on lessons learned during the COVID-19 crisis and the momentum built from the International Year of Creative Economy for Sustainable Development, to support synergies between the culture and education sectors, especially in the digital age.

The decision also invites the Director-General to pursue the mobilization of partners and stakeholders, including by drawing on the strong partnerships developed through the Global Education Coalition, to support activities related to culture and arts education.