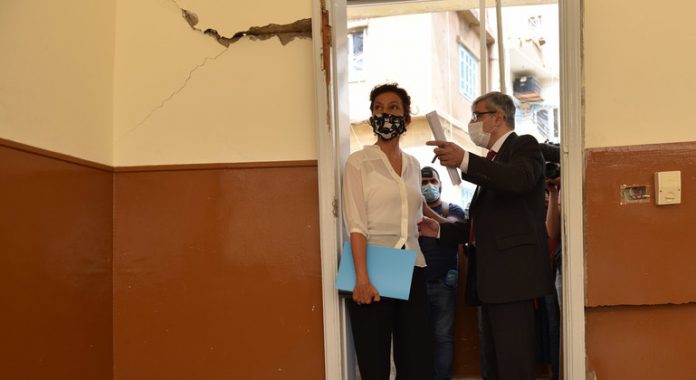 The devastating blasts rocked the Lebanese capital and wreaked havoc throughout the city, killing close to 200 people, injuring thousands of others, and leaving around a quarter of a million homeless.

It also impacted some 8,000 structures, including 640 historic buildings, approximately 60 of which are at risk of collapse.

In unflagging solidarity with the people of Lebanon, the UN Educational, Scientific and Cultural Organization (UNESCO) underscored its commitment to applying the highest professional and management standards in coordinating support for education and culture in the UN assistance to Lebanon.

“UNESCO, of which Lebanon is a founding member, stands at their side to mobilize the international community and support the city’s recovery for and through culture, heritage and education”, Director-General Audrey Azoulay declared as she wrapped up a two-day visit.

In kicking off the ‘Li Beirut’ initiative, she solemnly appealed for the city’s historic centre be protected “to prevent property speculation and transactions taking advantage of residents’ distress and vulnerability”.

In addition to spearheading UN efforts to raise $23 million to education in Beirut, UNESCO has also committed to immediately rehabilitating 40 of the 159 affected schools with funds it has already raised.

In the coming months, the UN agency will prioritize funding for schooling and distance learning – an urgent issue for the 85,000 students affected.

“We must focus on education, because it is a major concern for families and it is where Lebanon’s future will be played out,” said the Director-General.

Stepping up to make a difference

To this end, the UNESCO Global Education Coalition, put in place the early weeks of the COVID-19 crisis, will hold a Special Session on the situation in Lebanon on Tuesday.

While raising funds to respond to this crisis, the UN cultural agency will also lead international coordination recovery and reconstruction efforts for Beirut’s culture and heritage.

She elaborated that this means protecting the “unique heritage of these neighbourhoods, respecting the city’s history, and supporting its creative energy”.

With museums, galleries and cultural institutions expected to experience substantial losses in revenues, preliminary estimates show that $500,000,000 are needed over the coming year to support heritage and the creative economy.

UNESCO will prioritize interventions to stabilize, secure and safeguard several historic buildings located in the most affected neighbourhoods.

“We are determined to mobilize the international community both for built heritage and museums, and for the hard-hit creative sector, by supporting artists and cultural professionals, whom UNESCO will also bring together in three ResiliArt debates in September,” Ms. Azoulay said.

To finance these operations on the ground, a UNESCO donors’ conference for Beirut will be organized before the end of next month.
During her two-day visit, the Director-General took stock of the situation by meeting with artists, members of the cultural sector and creative industries, including NGOs and local partners.

Audrey Azoulay, UNESCO’s Director-General, talks to the media during her visit to Beirut in August 2020.